The Global Financial Crisis and the Korean Economy 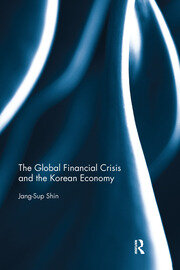 The Global Financial Crisis and the Korean Economy

This book deals with the question in two ways. First, it investigates the frame of mind that distances people from the reality of life. At the heart of it, it argues that there are wrong perceptions on the working of the world economy, in particular, the international financial market. It summarizes them as ‘the five conventional wisdoms’ in the international financial market and, by critically examining them, it draws on ‘the five financial theorems’, which would provide intellectual pillars for a more realistic understanding of the global financial market. Second, the book examines in detail the case of an emerging market economy that fell into a financial crisis twice in the recent decade. South Korea provides us with an interesting case of emerging market financial crises that came as ‘surprises’: it faced a financial crisis in 1997/98 after it had been acclaimed as one of ‘East Asian miracle economies’ and it was again befallen to a crisis during the global financial crisis in 2008/2009 after it was widely regarded as a country that had recovered from the crisis with one of the most successful implementations of the IMF-sponsored reforms.

Jang-Sup SHIN is an economics professor at the National University of Singapore. His research interests include East Asian economic growth, technology and innovation, financial crises and restructuring, competitive strategies and organizations of firms. He wrote books such as ‘The Economics of the Latecomers’ (Routledge 1996), ‘Restructuring Korea Inc.’ (Routledge 2003) and 'A Paradigm Shift for the Korean Economy’ (Chonglim 2008).

‘The global financial crisis points up the need for new thinking on financial market volatility and its real economic consequences. In this book, with its focus on emerging markets and specifically on Korea, Jang-Sup Shin provides just this. Not for those wedded to conventional wisdoms!’— Barry Eichengreee, Pardee and Helen N. Pardee, Professor of Economics and Political Science at the University of California, Berkeley

‘In this courageous book, Jang-Sup Shin develops an innovative and iconoclastic theoretical approach to understand the role of finance in economic development and uses it to analyse the evolution of the Korean economy in the last two decades. The resulting policy recommendations are unconventional but highly pragmatic, being based on wide-ranging historical and comparative evidence. It is a powerful book with profound implications not just for a better management of the Korean economy but for the future of economic development in general.’ —Ha-Joon Chang, University of Cambridge

'In this enormously insightful and clearly written book, Jang-Sup Shin convincingly argues that the cause of the South Korean foreign-exchange crises of 1997 and 2008 was adherence of Korean policy-makers to the misguided economic theory that a national economy must subordinate its industrial development strategies to the dictates of international financial markets. This theory is misguided because in a deregulated world speculators and manipulators dominate the operation of financial markets, with their gains coming at the expense of national economic development. Professor Shin contends, correctly in my view, that policy makers must see through conventional free-market ideology for the sake of implementing economic policies that promote stable and equitable growth. This important book provides sound intellectual support for this much-needed policy transition.’ —William Lazonick, Professor and Director, UMass Center for Industrial Competitiveness, and President, The Academic-Industry Research Network

‘The major contribution of Jang-Sup Shin's book is that it provides a clear and consistent analytically coherent explanation of the Korean economy's performance from the Asian crisis of 1997-98 to the Global Financial crisis of 2007-08. More importantly, it builds on this analysis to provide a prognosis and policy recommendation for Korea in the Post-crisis global environment that is relevant to a wide range of middle-income developing countries. Rather than seeking the indicators of past successes it provides an important alternative for future success in a world of global financial turbulence.’ —Jan Kregel, Senior Scholar at the Levy Economics Institute of Finance at Bard College and Professor of Finance and Development at Tallinn University of Technology, Tallinn, Estonia

‘Once again, Shin deploys his superb skills as a heterodox economist skeptical of the now much discredited conventional economic wisdom with his considerable earlier experience as a highly acclaimed Korean business journalist to provide yet another insightful book on the global financial crisis and the South Korean economy. This erudite book reflects his familiarity with the range of economic perspectives on the origins and consequences of the 2008-2009 financial crisis as well as the perceived role of and impacts on the Korean economy. ‘—Jomo Kwame Sundaram, Former UN Assistant Secretary General for Economic Development (2005-2012) and Research Coordinator for the G24 Intergovernmental Group on International Monetary Affairs and Development (2006-2012).