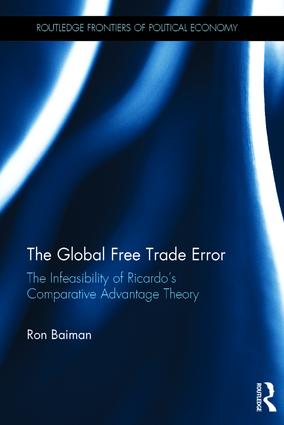 The doctrine of "free trade" is second only to that of "free markets" in undergirding ideological support for our current global economic structures and rules. From David Ricardo’s "comparative advantage principle" to James Meade’s Neoclassical or mainstream economics proof of self-adjusting free trade equilibrium, the free trade doctrine has had a lasting and destructive hold on Neoclassical economic thinking since its inception.

provides a detailed analysis of these foundational models and counter-poses these to alternative Neo-Marxist "unequal exchange" models of global trade and finance. In the first part of the book the three core free trade models alluded to above are respectively demonstrated to be: overdetermined, inapplicable, and infeasible. In particular, Ricardo’s parable is shown to support managed trade rather than free trade as Ricardo and two centuries of economic texts have claimed. In the second part of the book, unequal exchange analyses of global trade are shown to provide logically coherent and useful insights into global trade and finance. In the third and final part of the book, this unequal exchange perspective is used, within a general "demand and cost" setting, to develop a set of global managed trade principles for a more equitable and sustainable world trade regime.

This book will be of great interest to those who study political economy, history of economic thought, and international trade, including trade agreements and tariffs.

‘The doctrine of "free trade" is second only to that of "free markets" in undergirding ideological support for our current global economic structures and rules. The Global Free Trade Error provides a detailed analysis of these foundational models and counter-poses these to alternative Neo-Marxist "unequal exchange" models of global trade and finance.’ — www.urpe.org (February 20, 2017)

PART I The illogical foundations of free trade ideology

2 The infeasibility of free trade in classical theory: Ricardo’s comparative advantage parable has no solution

3 The limits of free trade in Neoclassical theory: from Heckscher-Ohlin to unequal exchange

5 Unequal exchange without a labor theory of prices: on the need for a global Marshall Plan and solidarity trading regime

6 Unequal exchange and the rentier economy

7 Toward a new political economy for the U.S.

8 There is no alternative to managed global trade