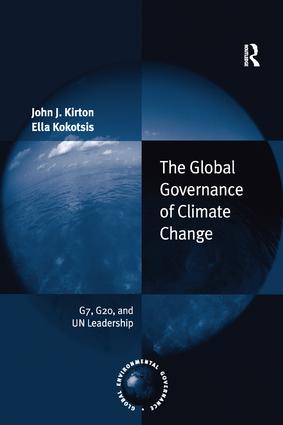 The Global Governance of Climate Change

Climate change control has risen to the top of the international agenda. Failed efforts, centred in the United Nations, to allocate responsibility have resulted in a challenge now reaching crisis stage. John J. Kirton and Ella Kokotsis analyse the generation and effectiveness of four decades of intergovernmental regimes for controlling global climate change. Informed by international relations theories and critical of the prevailing UN approach, Kirton and Kokotsis trace the global governance of climate change from its 1970s origins to the present and demonstrate the effectiveness of the plurilateral summit alternative grounded in the G7/8 and the G20. Topics covered include: - G7/8 and UN competition and convergence on governing climate change - Kyoto obligations and the post-Kyoto regime - The role of the G7/8 and G20 in generating a regime beyond Kyoto - Projections of and prescriptions for an effective global climate change control regime for the twenty-first century. This topical book synthesizes a rich array of empirical data, including new interview and documentary material about G7/8 and G20 governance of climate change, and makes a valuable contribution to understanding the dynamics of governing climate change. It will appeal to scholars, researchers, and policy makers interested in the dynamics behind governance processes within the intergovernmental realm.

’In this meticulously researched volume, the authors document the cyclical history of minilateral efforts to govern global climate change by the G7/G8 and the G20.’ Peter M. Haas, UMASS Amherst, USA

Global Environmental Governance addresses the new generation of twenty-first century environmental problems and the challenges they pose for management and governance at the local, national, and global levels. Centered on the relationships among environmental change, economic forces, and political governance, the series explores the role of international institutions and instruments, national and sub-federal governments, private sector firms, scientists, and civil society, and provides a comprehensive body of progressive analyses on one of the world's most contentious international issues.