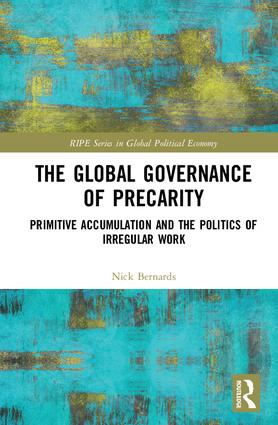 The Global Governance of Precarity

Primitive Accumulation and the Politics of Irregular Work, 1st Edition

‘Standard’ employment relationships, with permanent contracts, regular hours, and decent pay, are under assault. Precarious work and unemployment are increasingly common, and concern is also growing about the expansion of informal work and the rise of ‘modern slavery’. However, precarity and violence are in fact longstanding features of work for most of the world’s population. Lamenting the ‘loss’ of secure, stable jobs often reflects a strikingly Eurocentric and historically myopic perspective.

This book argues that standard employment relations have always co-existed with a plethora of different labour regimes. Highlighting the importance of the governance of irregular forms of labour the author draws together empirical, historical analyses of International Labour Organisation (ILO) policy towards forced labour, unemployment, and social protection for informal workers in sub-Saharan Africa. Archival research, extensive documentary research and interviews with key ILO staff are utilised to explore the critical role the organization’s activities have often played in the development of mechanisms for governing irregular labour.

Addressing the increasingly widespread and pressing practical debates about the politics of precarious labour in the world economy this book speaks to key debates in several disciplines, especially IPE, global governance, and labour studies. It will also be of interest to scholars working in development studies and critical political economy.

"In this extremely well researched book Nick Bernards takes aim at, and dispatches, various theories of precarious and forced labour. His critique of the ILO’s role in generating a mythical ideology of properly functioning contract-based labour markets is excellent. This book represents an important academic and political intervention into debates around, and campaigns against, diverse forms of labour exploitation." - Benjamin Selwyn, University of Sussex, UK

"This is a timely book as the International Labour Organization (ILO) approaches its first century. It shows through meticulous scholarship the ILO’s efforts to regulate forced labour, labour migration and informal labour in sub-saharan Africa. It is the missing story of labours’ marginalised . It is is a must read for students of International Political Economy (IPE) , labour and development studies." - Edward Webster, University of Witwatersrand, South Africa

Chapter 2: The Governance of Forced Labour and the Antinomies of Colonialism

Chapter 4: Irregular Work in the Postcolonial Social Order: The ILO Discovers the ‘Informal’

Chapter 5: Neoliberal Crises and the Politics of Informality