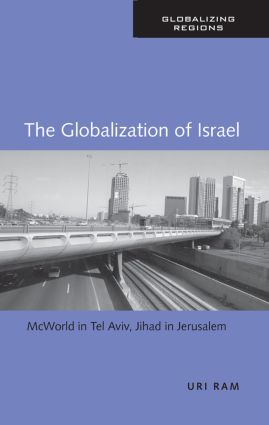 The Globalization of Israel

This book focuses on how globalization is impacting contemporary Israel. It is a concise and originally argued introduction to Israel, but the author, Uri Ram, is careful to frame his analysis in a broader discussion of Israeli history and broader social currents. Focusing in particular on two defining – and conflicting – contemporary trends; one toward advanced liberal democracy with a cosmopolitan edge, and the other toward ethno-religious traditionalism and rejection of the secularism associated with market driven globalization. The cosmopolitan, high-tech driven city of Tel Aviv represents the former trend, and Jerusalem – a city increasingly dominated by orthodox Jews – represents the latter. Using Benjamin Barber's Jihad versus McWorld thesis to good effect, Ram's book will stand as an ideal introduction to contemporary Israel and its place in the world.

"The Globalization of Israel is essential reading for anyone who wishes to understand contemporary Israeli society or current events in Israel. Ram presents us with an original theoretical standpoint (globalization) which should be integrated into our academic analysis of the world in general and of Israel in particular." - Ben Herzog, MESA Bulletin (44-1 Summer 2010)

Uri Ram, a sociologist, is Senior Lecturer at the Department of Behavioral Sciences at Ben Gurion University, Israel. In the 1990s, Ram was the first scholar to employ a global perspective in analyzing Israeli society. He is the author, editor and co-editor of six books, as well as numerous articles about this and other related topics. His work has been published in English, Hebrew, German, French, and Arabic. He is a widely published scholar on Israel.