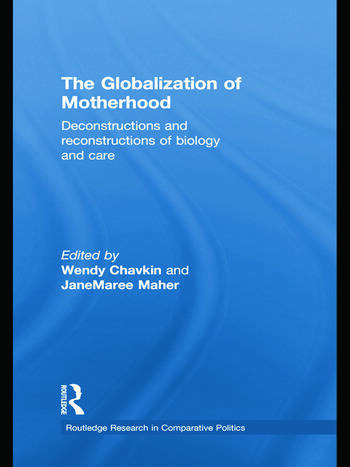 The convergence of dramatic declines in birth rates worldwide, aside from sub-Saharan Africa, the rise of untrammelled global movement of capital, people and information, and the rapid-fire dissemination of a host of new medical technologies has led to the "globalization of motherhood".

This book brings together research from the Global North and the Global South to illuminate how contemporary motherhood is being changed by the processes of globalization. It locates declining fertility and desire for motherhood in the context of female employment, the development of the global market in reproductive technologies, the rising transnational labour market demand for feminized carework, and changing family forms. Focusing on the impacts on women who mother- and enable others to do so- across diverse contexts, the book examines the way in which conception, gestation mothering labor and care are being mobilized across national boundaries.

Dr. Wendy Chavkin is Professor of Public Health and Obstetrics-Gynecology at Columbia University in New York. She is currently involved in launching Global Doctors for Choice and previously served as the chair to the Board of Directors of Physicians for Reproductive Choice and Health. From 1994 to 2002 she was editor-in-chief of The Journal of the American Medical Women's Association, and from 1984 to 1988, she served as the director of The Bureau of Maternity Services and Family Planning in New York City's Department of Health. She has written extensively about women's reproductive health issues for over two decades, including the consequences of welfare reform for the health of women and children, occupational health, reproductive health in medical education, HIV, and illegal drug use in pregnancy. Dr. Chavkin was the 2004-2005 Fulbright New Century Scholar for her research on Fertility Decline and the Empowerment of Women.

JaneMaree Maher is Director of the Centre for Women's Studies and Gender Research in the School of Political and Social Inquiry. Her research interests are focused on work/family balance, women's mothering and employment, and pregnancy and birth.