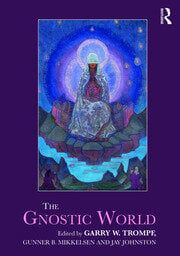 The Gnostic World is an outstanding guide to Gnosticism, written by a distinguished international team of experts to explore Gnostic movements from the distant past until today. These themes are examined across sixty-seven chapters in a variety of contexts, from the ancient pre-Christian to the contemporary. The volume considers the intersection of Gnosticism with Jewish, Christian, Islamic and Indic practices and beliefs, and also with new religious movements, such as Theosophy, Scientology, Western Sufism, and the Nation of Islam.

This comprehensive handbook will be an invaluable resource for religious studies students, scholars, and researchers of Gnostic doctrine and history.

IntroductionGarry W. TrompfTheoretical1. Gnosticism, Gnostics, and GnosisDylan M. Burns2. "The Gnostic World": A History of Scholarship (until 2000)Garry W. Trompf3. Gnostics and Temporality: From Myth to MacrohistoryGarry W. TrompfAncient 4. Ancient Pre-Christian "Gnosticisms": The State of the QuestionsCarl B. Smith II5. The Jewish Background to "Gnosticism": A Guide for the PerplexedGarry W. Trompf6. Gnostic Motifs in the New TestamentPheme Perkins7. On Ancient "Gnosticism" as a Problematic CategoryMichael A. Williams8. Gender Issues and the Study of Ancient "Gnosticism"Majella Franzmann9. The Gnostics in Early Christian HeresiologyMark Edwards10. Genres of Gnostic Literature and the "Classical Gnostic" School of Thought John D. Turner11. Sethian Gnostic SpeculationJohn D. Turner12. Basilides and the BasilidiansJean-Daniel Dubois13. Valentinus and the ValentiniansEinar Thomassen14. Is the Gospel of Thomas Gnostic?David W. Kim15. The Gospel of Judas and the Tchacos CodexGarry W. Trompf and David W. Kim16. The Mandaeans: Writings, Rituals, and ArtBrikha Nasoraia17. Hermetism and GnosticismJean-Pierre Mahé18. Plotinus and the GnosticsFrancis Lacroix and Jean-Marc Narbonne19. Gnostic Elements in Ancient Magical PapyriMalcolm Choat20. Mani’s LifeIain Gardner21. The Manichaean Path to SalvationJason D. BeDuhn22. Insight and Means in Chinese Manichaean TextsGunner B. Mikkelsen

Garry W. Trompf is Emeritus Professor in the History of Ideas, and Adjunct Professor in Peace and Conflict Studies, University of Sydney, Australia.

is Senior Lecturer in the Department of Ancient History, Macquarie University, Sydney, Australia.

"As a new wave of critical scholarship into Gnosticism, ancient and modern, begins, The Gnostic World is the ideal place to get caught up. Impressively combining concise entries on Gnosticisms familiar and unfamiliar, from the early Christianity to medieval Islam, fin de siècle occultists and 21st century cinema, with digestible summaries of the definitional and theoretical controversies, this will be the standard reference work for many years to come." David G. Robertson, The Open University, UK

"The Gnostic World is a comprehensive, ground-breaking presentation of the diverse beliefs, practices, and social formations related to the movements previously known as "Gnostic." In over forty chapters ranging from the ancient world to contemporary culture, international experts address recent controversy regarding the historical reconstruction of such groups while also breaking new ground in following diverse but interconnected literary and intellectual traditions. The result is a major achievement in the comparative study of religions." Paul Dilley, The University of Iowa, USA

"This broad and comprehensive volume not only includes chapters on Gnostic movements in late antiquity, but also covers more recent religions that are structurally similar to ancient Gnosticism, as well as such topics as anti-cult groups and Gnosticism in fiction and music. It will be an invaluable resource for scholars and other interested readers." Olav Hammer, University of Southern, Denmark.

"The Gnostic World is an impressive collection of interdisciplinary studies of Gnosticism, a phenomenon that has intrigued (and often confused) many people from antiquity through today. Written by leading international experts, the volume explores all dimensions of the topic, often with new insights and fascinating cross-references to other cultural phenomena and theoretical discussions. The Gnostic World is an indispen