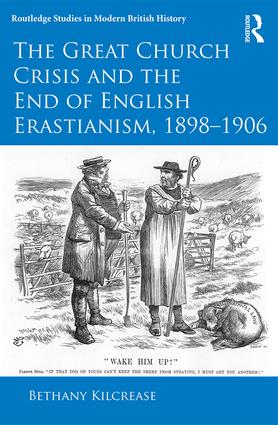 The Great Church Crisis and the End of English Erastianism, 1898-1906

This book traces the history of the "Church Crisis", a conflict between the Protestant and Anglo-Catholic (Ritualist) parties within the Church of England between 1898 and 1906. During this period, increasing numbers of Britons embraced Anglo-Catholicism and even converted to Roman Catholicism. Consequent fears that Catholicism was undermining the "Protestant" heritage of the established church led to a moral panic.

The Crisis led to a temporary revival of Erastianism as protestant groups sought to stamp out Catholicism within the established church through legislation whilst Anglo-Catholics, who valued ecclesiastical autonomy, opposed any such attempts. The eventual victory of forces in favor of greater ecclesiastical autonomy ended parliamentary attempts to control church practice, sounding the death knell of Erastianism. Despite increased acknowledgment that religious concerns remained deep-seated around the turn of the century, historians have failed to recognize that this period witnessed a high point in Protestant-Catholic antagonism and a shift in the relationship between the established church and Parliament. Parliament’s increasing unwillingness to address ecclesiastical concerns in this period was not an example advancing political secularity. Rather, Parliament’s increased reluctance to engage with the Church of England illustrates the triumph of an anti-Erastian conception of church-state relations.

"There are good chapters on the political and religious motivations of William Harcourt, the leader of the Liberal opposition in Parliament and a determined anti-Ritualist, and of Arthur Balfour, the Conservative leader and Prime Minister whose High Church sympathies led him to resist the efforts of Harcourt and others to introduce legislation for the suppression of Ritualism." - Jeremy Morris, Trinity Hall, University of Cambridge

2 The Church Crisis and Erastianism

3 Never Trust a Clergyman in Black: British Anti-Catholicism during the Great Church Crisis

6 Arthur Balfour and coming the Triumph of Ecclesiastical Independence, 1898–1902

7 A New Front in the Church Crisis: The 1902 Education Act

8 The Royal Commission on Ecclesiastical Discipline, another Education Bill, and the Implosion of Erastianism

Bethany Kilcrease is an Associate Professor of History at Aquinas College in Grand Rapids, Michigan. She has written and spoken on late-Victorian Anglicanism and parliamentary politics, Protestant responses to the Boer war, anti-Catholicism in popular literature, and the role of Victorian Catholic apologists in popularizing science.