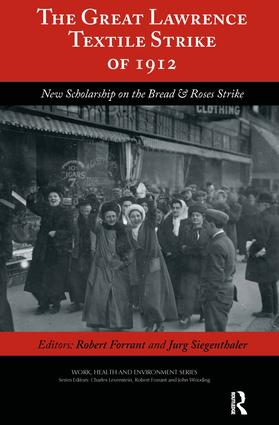 The Great Lawrence Textile Strike of 1912

"In Lawrence, Massachusetts, fully one-half of the population 14 years of age or over is employed in the woolen and worsted mills and cotton mills". Thus begins the federal government's Report on Strike of Textile Workers in Lawrence, Massachusetts in 1912 . This book follows up, one hundred years later. The story's retelling offers readers an exciting reexamination of just how powerful a united working class can be. The Great Lawrence Textile Strike of 1912 - the Bread and Roses Strike - was a public protest by 20,000 to 25,000 immigrant workers from several countries, prompted by a wage cut. Backed by skillful neighborhood organizing, supported by hundreds of acts of solidarity, and unified by a commitment to respect every striker's nationality and language, the walkout spread across the city's densely packed tenements. Defying the assumptions of mill owners and conservative trade unionists alike that largely female and ethnically diverse workers could not be organized, the women activists, as one mill boss described them, were full of "lots of cunning and also lots of bad temper. They're everywhere, and it's getting worse all the time." Events in Lawrence between January 11 and March 25, 1912, changed labor history. In this volume the authors tackle the strike story through new lenses and dispel assumptions that the citywide walkout was a spontaneous one led by outside agitators. They also discuss the importance of grasping the significance of events like the 1912 strike and engaging in the process of community remembrance. This book appeals to a wide constituency. Most directly, it is of great relevance to historians of labor, industrialization, immigration, and the development of cities, as well as researchers studying social movements. The story of the Bread and Roses Strike resonates strongly with social justice supporters, the women's movement, advocates for children's well-being, and anti-poverty organizations. Social studies and college-level teachers will find it a rich resource. Graduate-level students will find inspiration for further research. The Bread and Roses strike has excellent name recognition and has always had a considerable international audience.

“‘Believe Comrades . . . the Day is Coming When Those at the End of Their Rope Will Require Struggle. It Will Be, Perhaps, Tomorrow.’

The Committee of Ten: The Local Heroes Who Faced Lawrence’s Mill Men and Won in 1912 Clarisse A. Poirier

The Parades: Evolving Views of God and Country and the IWW in Lawrence Ken Estey

The “American Dream” and the 1912 Lawrence Textile Strike Frank Fletcher

The Cloth From Which We Are Cut: Using Music, Narration, and Images to Tell the Story of the 1911 Triangle Shirtwaist Fire Vicki Gabriner and Linda Stern

Lessons Learned: A Comparison of the Textile and Apparel Industry of Early 19th-Century Lawrence and Lowell with China Today Virginia M. Noon

Bread and Roses: Why the Legend Lives On Robert Ross