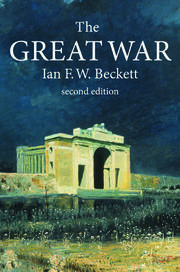 The course of events of the Great War has been told many times, spurred by an endless desire to understand 'the war to end all wars'. However, this book moves beyond military narrative to offer a much fuller analysis of of the conflict's strategic, political, economic, social and cultural impact.

Starting with the context and origins of the war, including assasination, misunderstanding and differing national war aims, it then covers the treacherous course of the conflict and its social consequences for both soldiers and civilians, for science and technology, for national politics and for pan-European revolution.

The war left a long-term legacy for victors and vanquished alike. It created new frontiers, changed the balance of power and influenced the arts, national memory and political thought.

The reach of this acount is global, showing how a conflict among European powers came to involve their colonial empires, and embraced Japan, China, the Ottoman Empire, Latin America and the United States.

8. War and the State

is an internationally renowned specialist on the Great War. His publications include such acclaimed titles as Ypres : The Last Battle , 1914 (2004). The First World War: The Essential Guide to Sources in the UK National Archives (2003), and A Nation in Arms: A Social Study of the British Army in the First World War (with Keith Simpson) (1985)