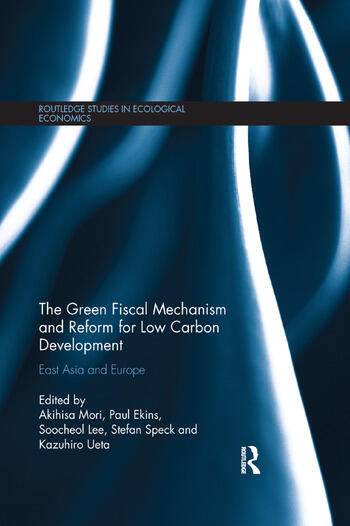 This book reviews how far East Asian nations have implemented green fiscal reform, and show how they can advance carbon-energy tax reform to realize low carbon development, with special reference to European policy and experience.

East Asian nations are learning European experiences to adopt them in their political, economic and institutional contexts. However, implementation has been slow in practice, partly due to low acceptability that comes from the same concerns as in Europe, and partly due to weak institutional arrangements for the reform. The slow progress in the revenue side turns our eyes to the expenditure side: how East Asian nations have increased environmental-related expenditures, and how far they have greened sectorial expenditures. This "lifecycle" assessment of fiscal reform, coupled with the assessment of the institutional arrangement constitutes the features of this book.

The book helps to provide an overall picture of green fiscal reform and carbon-energy tax reform in the East Asian region. The region has a variety of countries, from lowest income to high income nations. Nations have different interests in substance and barriers for reform. This book covers recent development of environmental fiscal reform and carbon-energy taxation in wider nations in the region, including South Korea, Taiwan, Thailand, Vietnam, Indonesia and Japan. In addition, the book’s holistic view helps to understand why a specific nation has interest and concern on some aspects of the reforms.

EKINS, Paul has a Ph.D. in economics from the University of London and is Professor of Resources and Environmental Policy, and Director of the UCL Institute for Sustainable Resources. He is also a Co-Director of the UK Energy Research Centre, in charge of its Energy Systems theme. He was a Member of the Royal Commission on Environmental Pollution from 2002-2008. From 2007-09 he was Director of the UK Green Fiscal Commission. He also has extensive experience consulting for business, government and international organisations. Paul Ekins' academic work focuses on the conditions and policies for achieving an environmentally sustainable economy, and he has published extensively in the field of environmental taxation, his output including the co-edited books Carbon-Energy Taxation: Lessons from Europe (with Mikael Skou Anderson) (Oxford University Press, Oxford, 2009); and Environmental Tax Reform (ETR): A Policy for Green Growth (with Stefan Speck) (Oxford University Press, Oxford, 2011).

SPECK, Stefan is an environmental economist with a Ph.D. in economics from Keele University in England. He is working as a project manager for environmental economics and policies at the European Environment Agency (EEA) in Copenhagen. Prior to that, he was employed as a senior consultant at Kommunalkredit Public Consulting in Austria and as a senior project scientist at the National Environmental Research Institute/University of Aarhus in Denmark within the EU-funded project ‘Competitiveness Effects of Environmental Tax Reforms’ (COMETR). He also contributed to the research project ‘Resource Productivity, Environmental Tax Reform and Sustainable Growth in Europe’ (PETRE) funded by the Anglo-German Foundation.