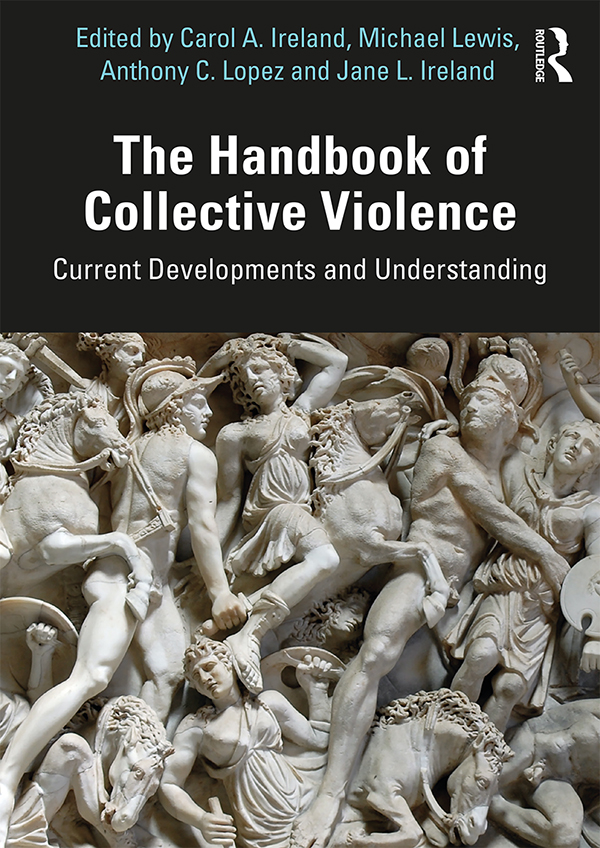 The Handbook of Collective Violence

The first of its kind, the Handbook of Collective Violence covers a breadth of contexts in which collective violence occurs, bringing together international perspectives from psychology, criminology and sociology into one complete volume.

There have been significant advances made in the last twenty-five years regarding how collective violence is conceptualised and understood, with a move away from focusing on solely individual forms of violence toward examining and understanding violence that can occur within groups. This handbook presents some of the most interesting topics within the area of collective violence, drawing upon international expertise and including some of the most well-known academics and practitioners of our generation. Structured into four parts: Understanding War; Terrorism; Public order and organised violent crime; and Gang and multiple offender groups, this volume provides academics and practitioners with an up to date resource that covers core areas of interest and application.

Accessibly written, it is ideal for both academics and policymakers alike, capturing developments in the field and offering a deep theoretical insight to enhance our understanding of how such collective violence evolves, alongside practical suggestions for management, prevention and intervention.

Chapter 1. The Evolution of Warfare

Chapter 3: Emotional underpinnings of war: An evolutionary analysis of anger and hatred

Chapter 6: How Modern is the Holocaust?

Chapter 7: The Evolution of Terrorism: Historical Underpinnings and the Development of Group Terrorism

Chapter 8: Psychological and criminological understanding of terrorism: Theories and models

Chapter 9: Legal and Security Frameworks for Responding to Online Violent Extremism: A Comparison of Far-right and Jihadist Contexts

Chapter 10: Continuities and discontinuities in radicalization trends: The case of Kenya

Chapter 11: Responses to terrorism: Policing and countering terrorism in the modern age

Chapter 14: How crowd violence arises and how it spreads: A critical review of theory and evidence

Chapter 19: The use of violence and the evolution of organized crime: Evidence from Mexico

Chapter 22: Distinguishing between aggression in groups and in gangs: Are gangs always violent?

Chapter 27: Prison gangs - what we know so far and how unique are they?

Dr. Carol A. Ireland is a Consultant Chartered Psychologist, Forensic Psychologist and Chartered Scientist. She is a Reader in Aggression at the University of Central Lancashire and Senior Research Lead at the Ashworth Research Centre. She is also the Director of Studies for the MSc in Forensic Psychology. She holds a visiting/honorary professorship at Charles Sturt University. She currently works at the Coastal Child and Adult Therapeutic Services, working with children and adults who present with offence concerns and/or are victims. Her research interests are around aggression, including critical incident management, harmful sexual behaviour, trauma and sexual exploitation.

is a Chartered Psychologist, Chartered Scientist, Associate Fellow of the British Psychological Society and Lecturer in Forensic Psychology at the University of Central Lancashire, Preston. He is the Research Lead for Policing and Security at the Ashworth Research Centre, Mersey Care NHS Trust, and as part of this role collaborates with numerous police forces across the UK. His research interests include organised crime, aggression, child sexual exploitation and police wellbeing. Michael is the Editor-In-Chief of the Journal of Criminological Research, Policy and Practice, and he also sits on the editorial board for the Journal of Aggression, Conflict and Peace Research. He has a background in operational policing.

is Associate Professor of Political Psychology in the School of Politics, Philosophy, and Public Affairs, at Washington State University. He received his Ph.D. from Brown University, and also received training as a research affiliate at the Center for Evolutionary Psychology, University of California, Santa Barbara. His research explores the evolutionary origins of warfare, as well as its constituent psychological dynamics, such as: revenge, the nature of deterrence, collective action problems of warfare, extremist violence, and distinctions between offensive and defensive aggression. Dr. Lopez serves as Associate Editor of Politics with the Evolution Institute and blogs regularly at Psychology Today.

is a Chartered Forensic Psychologist and Chartered Scientist, holds a Professorial Chair at the University of Central Lancashire and is Violence Treatment Lead within High Secure Services, Ashworth Hospital. She holds three further (visiting/honorary) professorships at Abo Akademi University, Charles Sturt University, and Cardiff Metropolitan University. She is currently academic lead for the Ashworth Research Centre.