The Healthy Edit
Creative Editing Techniques for Perfecting Your Movie 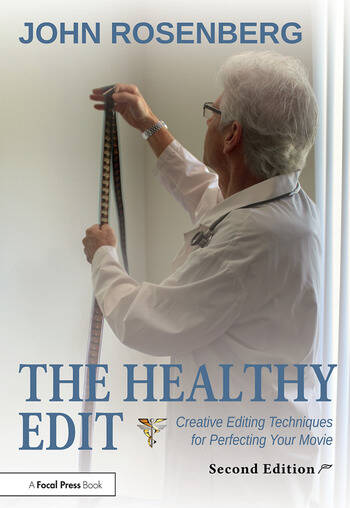 The Healthy Edit: Creative Editing Techniques for Perfecting Your Movie

This updated and revised new edition of The Healthy Edit provides aspiring and working editors with creative editing strategies they can employ to enhance a film, while also overcoming common production problems. With decades of experience editing and film doctoring Hollywood features, author John Rosenberg reveals both the aesthetic and technical aspects of the editor’s art, demonstrating tricks and techniques for nursing an ailing project back to health or enhancing a well one. Whether it's a bad performance from an actor, a hole in the story or script, a continuity or pacing issue, or a poorly-composed shot, every film or show we watch encounters challenges during production—and fixing these issues becomes the job of the editor.

2. Mastering the Art of Film Editing

3. The Film Doctor Is In

7. A Brief History of the Practice

12. Psychiatry of Character Disorders—Part I

John Rosenberg is a Hollywood-based film editor and professor at USC’s School of Cinematic Arts, where he teaches the aesthetics of motion picture editing. He attended UC Berkeley and UCLA, graduating with honors from the film school. As an editor, Rosenberg is credited on nearly three dozen feature films, including Prancer, Mannequin: On the Move , Playmaker, The Convent, and Brush with Danger—as well as television (Gift of Fear and National Geographic’s Expeditions from the Edge)—for such companies as 20th Century Fox, Lionsgate, Orion, New Line, and Artisan. He is the author of the award winning novel, Tincture of Time (2012).

"The Healthy Edit is just what the doctor ordered! The analogy of the film editor as ‘doctor’ is a fresh view into the complexities and vagaries of film editing. Rosenberg serves up hefty doses of ideas about structure, rhythm, pace and timing. Essential tools to diagnose and treat any ‘patient.’ It is a perfect prescription for success!"

"John Rosenberg is a remarkable teacher of the art of editing. So many USC students have benefited from his knowledge and experience. I am thrilled to see him share his insights beyond our campus so that many aspiring filmmakers can benefit."

"John is a wonderful writer who captures the process of a master editor. With great insight into the interplay of cinematic storytelling and human psychology, he offers example after example of the challenges faced by films of every stripe and size. Using our common life experiences to illustrate why some choices work and others don’t, John gets us to where the real magic happens – when the film takes on a life of its own. I highly recommend this book to students, teachers and professionals – whether editors, directors, writers, cinematographers, producers, anyone in every creative craft."

"John Rosenberg’s discussions of genre—in particular, his take on the always-difficult practice of comedy editing—and how to manipulate time, are just two examples of the value of this book. His experience and his ability to craft words both contribute to a wonderful book that every student of cinema can learn from."