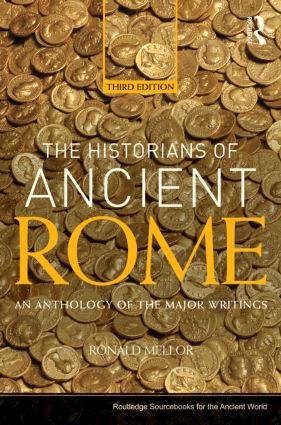 The Historians of Ancient Rome

An Anthology of the Major Writings, 3rd Edition

The Historians of Ancient Rome is the most comprehensive collection of ancient sources for Roman history available in a single English volume. After a general introduction on Roman historical writing, extensive passages from more than a dozen Greek and Roman historians and biographers trace the history of Rome over more than a thousand years: from the city’s foundation by Romulus in 753 B.C.E. (Livy) to Constantine’s edict of toleration for Christianity (313 C.E.)

Selections include many of the high points of Rome’s climb to world domination: the defeat of Hannibal; the conquest of Greece and the eastern Mediterranean; the defeat of the Catilinarian conspirators; Caesar’s conquest of Gaul; Antony and Cleopatra; the establishment of the Empire by Caesar Augustus; and the "Roman Peace" under Hadrian and long excepts from Tacitus record the horrors of the reigns of Tiberius and Nero.

The book is intended both for undergraduate courses in Roman history and for the general reader interested in approaching the Romans through the original historical sources. Hence, excerpts of Polybius, Livy, and Tacitus are extensive enough to be read with pleasure as an exciting narrative. Now in its third edition, changes to this thoroughly revised volume include a new timeline, translations of several key inscriptions such as the Twelve Tables, and additional readings. This is a book which no student of Roman history should be without.

"This is the only anthology of translated primary readings that covers more than a millennium of Roman history, from Monarchy to Late Empire." – Daniel Solomon, Vanderbilt University

"Quite simply, there is no comparable work in the English language! I consider this to be a minor classic in the field of Greco-Roman historiography." - Timothy M. Thibodeau, Nazareth College of Rochester

Ronald Mellor is Distinguished Professor of History at the University of California, Los Angeles, where he has been teaching Greek and Roman History, western civilization, and ancient world history since 1976. He was for five years Chair of the UCLA History department. His most recent book was "Tacitus’ Annals" published in 2011 by the Oxford University Press. His research focuses on ancient religion and Roman historiography. Other book include Thea Rome (1977), From Augustus to Nero: The First Dynasty of Imperial Rome (1990), Tacitus (1993), Tacitus: The Classical Heritage (1995), The Roman Historians (1999), and Caesar Augustus and the Creation of the Roman Empire (2005).

Routledge Sourcebooks for the Ancient World