The History of Rhetoric and the Rhetoric of History 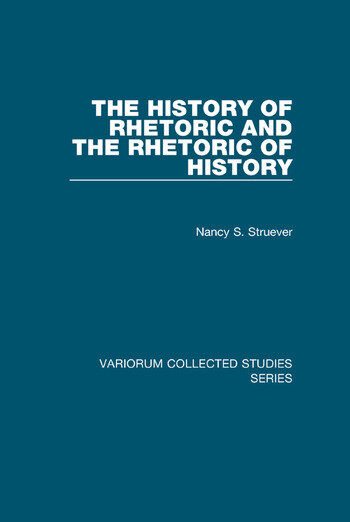 The History of Rhetoric and the Rhetoric of History

In the articles collected here Nancy Struever explores the basic assumption that rhetoric is not simply a bag of persuasive tricks, but functions, necessarily, as a mode of inquiry investigating not simply the mechanics of production and reception of discourse, but the psychological factors of reason and passion engaged by the assertion, modification, and contest of beliefs and dispositions of the civil communities. The first section looks both at contemporary historians employing rhetorical constructs and tactics and at contemporary accounts of the employment of rhetorical pedagogical material and theoretical texts in medieval and Renaissance cultural practices. The second set of articles considers change and continuity in the rhetorical exploitation's of genre forms in cultural programs, focuses on the strong reorientation of Classical forms of moral inquiry, on the ingenious use of the proverb, of etymology, of the exemplum, as well as on the changes in strategies in the theater, the novel, and art criticism. The final section deals with the strong historical interconnections of rhetoric with other disciplines: the motives and investigative tactics of medicine and rhetoric in the Renaissance and Early Modernity, and the shared interests and interwoven careers of rhetoric and law.

Contents: Introduction; Part 1 Rhetoric as Inquiry: The pertinence of rhetorical theory and practice for current Vichian scholarship; Topics in history; Subtilitas applicandi in rhetorical hermeneutics: Pierce's gloss and Kelly's example; Dilthey's Hobbes and Cicero's rhetoric; Political rhetoric and rhetorical politics in Juan Luis Vives (1492-1540); AlltÃ¤glichkeit, timefullness in the Heideggerian program; Historical priorities. Part 2 The Rhetoric of Genres: Lorenzo Valla: humanist rhetoric and the critique of the classical languages of morality; Fables of power; Proverbial signs: formal strategies in Guicciardini's Ricordi; Pasquier's Recherches de la France: the exemplarity of his medieval sources; Shakespeare and rhetoric; The conversable world: 18th-century transformations of the relation of rhetoric and truth; Ethos and pathos in Ruskin's rhetoric; Florence and his aesthetic politics; Rhetoric: time, memory, memoir. Part 3 Rhetoric and the Disciplines: Petrarch's Invective contra medicum: an early confrontation of rhetoric and medicine; Rhetoric and medicine in Descartes' Passions de l'Ã¢me: the issue of intervention; Lionardo di Capoa's Parere (1681): a legal opinion on the use of Aristotle in medicine; Hobbes and Vico on law: a rhetorical gloss; Index.

’For a resource on the application of rhetoric as a mode of historical inquiry, this collection offers a plethora of case studies.’ Metapsychology