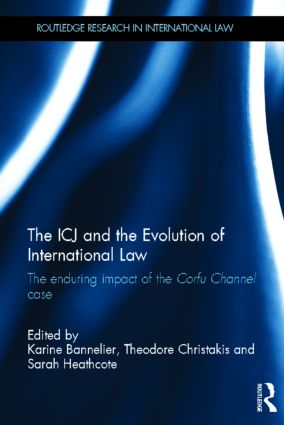 The ICJ and the Evolution of International Law

The Enduring Impact of the Corfu Channel Case, 1st Edition

In 1949 the International Court of Justice (ICJ) handed down its first judgment in the Corfu Channel Case. In diffusing an early Cold War dispute, the Court articulated a set of legal principles which continue to shape our appreciation of the international legal order. Many of the issues dealt with by the Court in 1949 remain central questions of international law, including due diligence, forcible intervention and self-help, maritime operations, navigation in international straits and the concept of elementary considerations of humanity. The Court’s decision has been cited on numerous occasions in subsequent international litigation. Indeed, the relevance of this judgment goes far beyond the subject matter dealt with by the Court in 1949, extending to pressing problems such as trans-boundary pollution, terrorism and piracy. In short, it was and remains a thoroughly modern decision — a landmark for international law; and one which today warrants reconsideration.

This book will be of particular interest to academics and students of International Law, International Relations and Legal History

Part I. Views from the Bench: the Legacy of the Corfu Channel Case, 1. An International Contentious Case on the Threshold of the Cold War, Mohammed Bedjaoui 2. The Corfu Channel case and the concept of sovereignty, Mohamed Bennouna 3.The Bar, Jean-Pierre Cot. Part II. The Historical and Institutional Framework 4.The Corfu Channel Case in Perspective: The Factual and Political Background, Aristoteles Constantinides 5.The International Court of Justice and the Security Council: Disentangling Themis from Ares, Giovanni Distefano and Etienne Henry. Part III. Procedural and Evidential Issues before the World Court 6.The Basis of the Court's Jurisdiction and the Scope and Usefulness of Forum Prorogatum, Henry Burmester 7. The International Court of Justice and Standards of Proof, Katherine Del Mar 8.‘Naval Secrets’, Public Interest Immunity and Open Justice, Kenneth J. Keith Part IV. Law of the Sea, 9. International Straits: Still a Matter of Contention?, Stuart Kaye 10. Dangerous Waters and International Law: The Corfu Channel Case, Warships, and Sovereignty Irritants, Rob McLaughlin 11. Peacetime Maritime Operations, Donald R. Rothwell Part V. Fundamental Rules of International Law 12.The Court’s Decision in silentium on the Sources of International Law: Its Enduring Significance, Akiho Shibata 13. Intervention and Self-help, Theodore Christakis 14. A Policy of Force,Christine Gray 15. Foundational Judgment or Constructive Myth? The Court’s Decision as a Precursor to International Environmental Law, Karine Bannelier 16. The Interaction between International Humanitarian Law and Human Rights Law and the Contribution of the ICJ, Djamchid Momtaz and Amin Ghanbari Amirhandeh 17. Elementary Considerations of Humanity, Matthew Zagor Part VI. Issues of State Responsibility 18. State Omissions and Due Diligence: Aspects of Fault, Damage and Contribution to Injury in the Law of State Responsibility,Sarah Heathcote 19. The Limits of Complicity as a Ground for Responsibility: Lessons Learned from the Corfu Channel case, Olivier Corten and Pierre Klein 20. Reparation and Compliance, Pierre d’Argent Conclusion, Hilary Charlesworth 21. Conclusion, Hilary Charlesworth

Theodore Christakis is Professor of International Law and Director of the Centre for International Security and European Studies of the University of Grenoble.