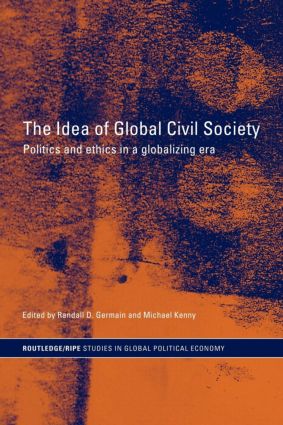 The Idea of Global Civil Society

Ethics and Politics in a Globalizing Era, 1st Edition

This book evaluates the claim that in order to explore the changing social foundations of global power relations today, we need to include in our analysis an understanding of global civil society, particularly if we also wish to raise ethical questions about the changing political and institutional practices of transnational governance. Bridging the normative concerns of political theorists with the historical and institutional focus of scholars of international relations and international political economy, this book is of broad interest to students and researchers concerned with international relations, civil society, global governance and ethics.

Michael Kenny is Professor of Politics at the University of Sheffield, UK, where he has taught since 1993. Before that he was a Lecturer in Politics at the Queen's University, Belfast, 1990-3. His principal research interests are in the fields of Anglo-American political thought and intellectual history. He has authored a study of the political ideas of the British New Left (Lawrence and Wishart 1995) and co-authored a guide to Anglophone literature on the history of political thought (with R.Eccleshall, Routledge, 1995). He is the co-editor of volumes on political theory and environmental policy (with J.Meadowcroft, Routeldge, 2000); and discourses of decline in British political thought (with R.English, Macmillan, 2000). He is the author of a number of scholarly papers, including studies of: the political theory of Isaiah Berlin; social democratic thought and the politics of New Labour; the political ideas of Edward Thompson; and (with Dr R.Germain) the uses/abuses of Antonio Gramsci in International Relations theory. He is author of 'Political Theory and the Politics of Identity' (forthcoming Polity Press, 2004).