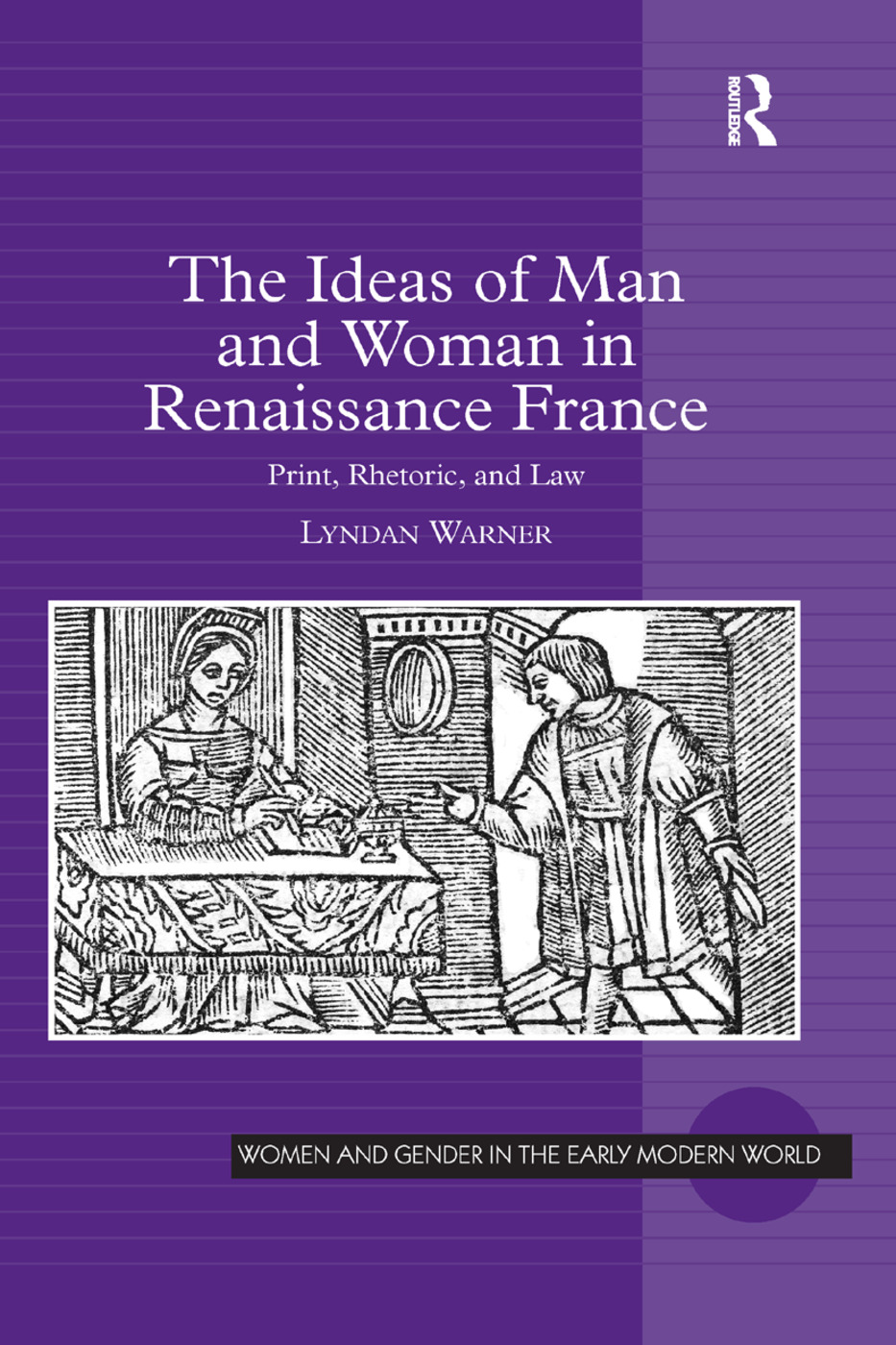 The Ideas of Man and Woman in Renaissance France

The Ideas of Man and Woman in Renaissance France provides the first comprehensive comparison of the printed debates in the 1500s over the superiority or inferiority of woman - the Querelle des femmes - and the dignity and misery of man. Analysing these writings side by side, Lyndan Warner reveals the extent to which Renaissance authors borrowed commonplaces from both traditions as they praised or blamed man or woman and habitually considered opposite and contrary points of view. In the law courts reflections on the virtues and vices of man and woman had a practical application-to win cases-and as Warner demonstrates, Parisian lawyers employed this developing rhetoric in family disputes over inheritance and marriage, and amplified it in the published versions of their pleadings. Tracing these ideas and modes of thinking from the writer's quill to the workshops and boutiques of printers and booksellers, Warner uses probate inventories to follow the books to the households of their potential male and female readers. Warner reveals the shifts in printed discussions of human nature from the 1500s to the early 1600s and shows how booksellers adapted the ways they marketed and sold new genres such as essays and lawyers' pleadings.

'This is an exciting new interpretation of the meanings of gender in Renaissance culture. The Ideas of Man and Woman in Renaissance France offers a detailed and complex reading of the widely known and culturally significant querelle des femmes and dignity of man and woman debates as deeply intertwined rhetorical exercises, tracing their evolution and influences from legal discourse, humanist modes of thought and expression, and the print trades, as well as emphasising the implications for these in return. Warner's deep analytical engagement with diverse sources such as literary works, legal case histories, legal discourse and training, book and print history as well as humanist educational practices is impressive indeed.' Susan Broomhall, The University of Western Australia ’Lyndan Warner promises a path-breaking study by exploring for the first time the fundamental connections between two major literary and cultural topics: the Querelle des femmes, on the nature of woman, and the Renaissance debate on the dignity and misery of man. The Ideas of Man and Woman in Renaissance France fulfils this ambitious promise admirably… Warner’s book will appeal to those with an advanced understanding of early modern feminism, and deserves to be read alongside the studies of Susan Broomhall, Linda Timmermans, and Ian Maclean.’ French Studies '… this book is persuasive and extremely engaging… pertinent passages offer welcome readings of some lesser-known authors. Moving well beyond her stated goal of highlighting the crucial connections between the literatures on the dignity and misery of man and on women, Lyndan Warner reminds scholars of history and literature alike of the interconnectedness of literary and legal texts, and of the influence of these works on the lives of women and men in the Renaissance.' H-France 'The ideas of Man and Woman in Renaissance France is an insightful and masterful work of historical scholarship. [The book] offers an array of importa

Contents: Introduction; Booksellers and the market to the 1550s; The dignity and misery of man … and of woman; The Querelle des femmes; The dialogue: beyond dignity and misery, beyond the Querelle des femmes; Diversity, citation and the invention of the essay; Books in the Palais de Justice and their readers in the late 1500s to early 1600s; Rhetoric, print and lawyers' pleadings in the Parlement de Paris; Conclusion; Bibliography' Index.

Lyndan Warner, an Associate Professor of History, obtained her doctorate from the University of Cambridge and since 1998 has worked at Saint Mary's University in Halifax, Nova Scotia, Canada.