The Immigrant Divide
How Cuban Americans Changed the U.S. and Their Homeland 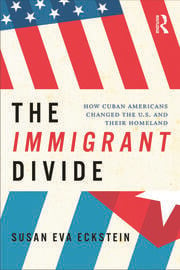 The Immigrant Divide: How Cuban Americans Changed the U.S. and Their Homeland

Are all immigrants from the same home country best understood as a homogeneous group of foreign-born? Or do they differ in their adaptation and transnational ties depending on when they emigrated and with what lived experiences? Between Castro’s rise to power in 1959 and the early twenty-first century more than a million Cubans immigrated to the United States. While it is widely known that Cuban émigrés have exerted a strong hold on Washington policy toward their homeland, Eckstein uncovers a fascinating paradox: the recent arrivals, although poor and politically weak, have done more to transform their homeland than the influential and prosperous early exiles who have tried for half a century to bring the Castro regime to heel. The impact of the so-called New Cubans is an unintended consequence of the personal ties they maintain with family in Cuba, ties the first arrivals oppose.

This historically-grounded, nuanced book offers a rare in-depth analysis of Cuban immigrants’ social, cultural, economic, and political adaptation, their transformation of Miami into the "northern most Latin American city," and their cross-border engagement and homeland impact. Eckstein accordingly provides new insight into the lives of Cuban immigrants, into Cuba in the post Soviet era, and into how Washington’s failed Cuba policy might be improved. She also posits a new theory to deepen the understanding not merely of Cuban but of other immigrant group adaptation.

Introduction  1. Immigrants and the Weight of Their Past  2. Immigrant Imprint in America  3. Politics for Whom and for What?  4. The Personal is Political: Bonding across Borders  5. Cuba Through the Looking Glass  6. Transforming Transnational Ties into Economic Worth  7. Dollarization and Its Discontents: Homeland Impact of Diaspora Generosity  8. Reenvisioning Immigration  Appendix I: Field Research

Susan Eva Eckstein is Professor of Sociology and International Relations at Boston University. Author of Back from the Future: Cuba under Castro, as well as numerous other books on Latin America, she is also former president of the Latin American Studies Association and the New England Council on Latin America.

"Based on extensive fieldwork in Cuba and the U.S., Eckstein shows that immigrant incorporation and enduring homeland involvements are cohort specific—how Cubans feel about their homeland and what they want to do about it depends upon when they leave and what they leave with. Her research also shows how the same group settles differently in different contexts of reception. A must-read for migration scholars, Latin Americanists, and policymakers alike." - Peggy Levitt, Wellesley College, author of God Needs No Passport: Immigrants and the Changing American Religious Landscape

"Eckstein, one of the leading scholars of contemporary Cuba, sheds light on the most recent and fascinating change in relations between Cuba and its diaspora: Officially, the government of Cuba and the leadership of the Miami diaspora may still hate each other but Cubans on both sides of the Straits of Florida have developed a flourishing relationship of remittances, migration, and transnational societies. This book is a terrific guide to relationships that are bound to develop even more in the years to come." - Jorge I. Domínguez, Harvard University, USA

"The immigrant’s journey is a story that has been told often, but never like this. With a sympathetic ear for the poetry of pathos and a critical eye for the data that give her insights depth, Eckstein has written a remarkable chronicle of two Cuban migrations to the United States. The ‘Exiles,’ who left soon after Castro arrived, and the ‘New Cubans,’ who came a generation later, were both changed by the journey, but what makes this book special is that she shows how they also changed both countries." - Robert Pastor, American University; National Security Advisor for Latin America, 1977–81

"Eckstein takes on the timely question of change in the Cuban Diaspora. She looks beyond the initial wave of émigrés to analyze the experiences of the other waves that followed. By tapping this natural case study of immigrant resources and different patterns of incorporation and influence, Eckstein builds a comprehensive theory of immigrant incorporation that accounts for sending and receiving country influences and the role of co-ethnic political organization in the country of migration." - Louis DeSipio, University of California, Irvine, USA

"Few social scientists know Cuba as deeply or as subtly as Susan Eckstein. She has written the best sociological analysis of the political evolution of the island during the revolutionary period, Back from the Future. Now, she turns her attention to the Cuban diaspora and, with the same dispassionate eye, tells us of its behavior and its consequences both for their native and their adopted countries. A must-read for anyone interested in Cuba or immigrant politics." - Alejandro Portes

"Eckstein’s skillful parsing of secondary data—be they from the U.S. Census or the FIU Cuba Poll, which is used liberally to establish an empirical differentiation between “waves” of migrants—unravels the threads of the Cuban experience." -  Guillermo J Grenier, Florida International University, Vol. 116, No. 2, American Journal of Sociology.

"Summing Up: Highly recommended.  All levels/libraries." - M. Vickerman, CHOICE (May 2010)