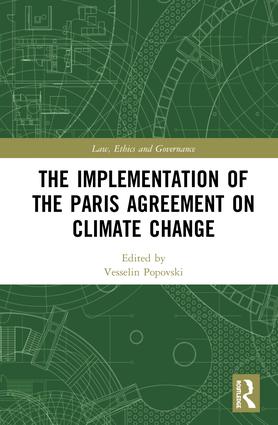 The Implementation of the Paris Agreement on Climate Change

In December 2015, 196 parties to the United Nations Framework Convention on Climate Change (UNFCCC) adopted the Paris Agreement, seen as a decisive landmark for global action to stop human- induced climate change. The Paris Agreement will replace the 1997 Kyoto Protocol which expires in 2020, and it creates legally binding obligations on the parties, based on their own bottom-up voluntary commitments to implement Nationally Determined Contributions (NDCs). The codification of the climate change regime has advanced well, but the implementation of it remains uncertain.

This book focuses on the implementation prospects of the Agreement, which is a challenge for all and will require a fully comprehensive burden- sharing framework. Parties need to meet their own NDCs, but also to finance and transfer technology to others who do not have enough. How equity- based and facilitative the process will be, is of crucial importance. The volume examines a broad range of issues including the lessons that can be learnt from the implementation of previous environmental legal regimes, climate policies at national and sub-national levels and whether the implementation mechanisms in the Paris Agreement are likely to be sufficient.

Written by leading experts and practitioners, the book diagnoses the gaps and lays the ground for future exploration of implementation options. This collection will be of interest to policy-makers, academics, practitioners, students and researchers focusing on climate change governance.

'An invaluable and comprehensive overview of the legal regime established by the historic Paris Agreement that brings together a series of informed commentators who evaluate its effectiveness from a variety of perspectives mirroring diverse national circumstances - a major contribution, illuminating hopes while voicing concerns.'

'In this exciting new book, Vesselin Popovski and colleagues take on the pressing, but as yet-understudied, question of "will the Paris Agreement work?" Over 20 expert scholars provide an impressively broad set of perspectives into whether the Paris Agreement’s adoption of a new bottom-up set of obligations and a much better-defined structure for monitoring and implementation will pay off. The book is particularly valuable because its chapters adopt both legal as well as ethical perspectives, derive valuable insights from the Kyoto Protocol experience, provide important details about all aspects of Paris’ implementation mechanisms, and clarify the many ways local conditions (in India, Latin America, Europe, Asia and the US) will shape the prospects for the Paris Agreement’s successful implementation. This book should be on the shelf of anyone interested in the fate of the Paris Agreement and of the planet.'

'This timely and valuable work recognizes the irony in the international climate change regime's tendency to enforce strict compliance with procedural obligations in such matters as transparency in state reporting on mitigation actions while being utterly unable to create agreement on aggregate emission reductions sufficient to avoid dangerous anthropogenic interference with the climate system. Among the many important insights presented by the book's contributing authors is the suggestion that the Paris Agreement will not succeed in its aims unless the parties to the treaty develop a broadly conceived and strong compliance system that keeps them faithful to the Agreement's target of limiting warming to well below 2 degrees Celsius.'

'States' implementation of international law depends on a mixture of interests and goals (political, economic, social, and reputational), expectations, knowledge, and capability - as well as external pressures or incentives - that move governments towards making and upholding international agreements. The contributors to this volume offer rich, detailed and varied analyses of the problems and prospects for efforts to implement the Paris climate agreement, addressing what is surely one of the key global problems of our time.'

'Climate change surpasses the ability of any one country to tackle on their own and requires global collective action. This book offers a comprehensive analysis of the architectural framework for collective action on climate change and incisive insights into the mechanisms for facilitation of implementation of the Paris Agreement with compelling examples across levels of governance around the world.'

Chapter 3: A Comparative Architectural Analysis of the 1997 Kyoto Protocol and the 2015 Paris Agreement and other ways to counter Environmental ‘Ratification Fatigue’ - Trudy Fraser

Chapter 5: Strengthening compliance under the Convention on Biological Diversity: Comparing Follow-up and Review Systems with the Global Climate Regime - Ana María Ulloa and Sylvia I. Karlsson-Vinkhuyzen

Chapter 10: The Implementation of the Principle of Common but Differentiated Responsibilities within the Paris Agreement: A Governance Values Analysis - Anna Huggins and Rowena Maguire

Chapter 11: After Paris: Do We Need an International Agreement on Green Compulsory Licensing? - Dong Qin

Chapter 13: Understanding the Relationship between Global and National Climate Regimes and Local Realities in India - Arnab Bose and Seema Sharma

Chapter 14: Paris Agreement and Climate Change in India: To Be or Not To Be? - Aditya Ramji

Chapter 15: USA and India on Climate Change: How the Tables Turned? - Armin Rosencranz and Rajnish Wadehra

Chapter 18: Strengths, Weaknesses, Opportunities and Threats To the Implementation Of The Paris Agreement In the Latin American Region - Trishna Mohan Kripalani and Gargi Katikithala

Vesselin Popovski is Professor and Vice Dean of the Law School, Executive Director of the Centre for the Study of the UN, Jindal Global University, India. Until 2014 he was Senior Academic Officer at the United Nations University, Tokyo. He has published numerous articles in peer-reviewed journals and has authored and edited over 20 books.