The Independent Labour Party, 1914-1939
The Political and Cultural History of a Socialist Party 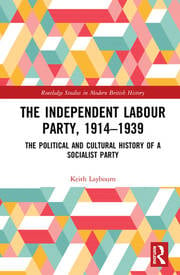 The Independent Labour Party, 1914-1939: The Political and Cultural History of a Socialist Party

Historians of political history are fascinated by the rise and fall of political parties and, for twentieth-century Britain, most obviously the rise of the Labour Party and the decline of the Liberal Party. What is often overlooked in this political development is the work of the Independent Labour Party (ILP), which was a formative influence in the growth of the political Labour movement and its leaders in the late nineteenth century and the early to mid-twentieth century. The ILP supplied the Labour Party with some of its leading political figures, such as Ramsay MacDonald, and moved the Labour Party along the road of parliamentary socialism. However, divided over the First World War and challenged by the Labour Party becoming socialist in 1918, it had to face the fact that it was no longer the major parliamentary socialist party in Britain.

Although it recovered after the First World War, rising to between 37,000 and 55,000 members, it came into conflict with the Labour Party and two Labour governments over their gradualist approach to socialism. This eventually led to its disaffiliation from the Labour Party in 1932 and its subsequent fragmentation into pro-Labour, pro-communist and independent groups. Its new revolutionary policy divided its members, as did the Abyssinian crisis, the Spanish Civil War and the Moscow Show Trials. By the end of the 1930s, seeking to re-affiliate to the Labour Party, it had been reduced to 2,000 to 3,000 members, was a sect rather than a party and had earned Hugh Dalton’s description that it was the ‘ILP flea’.

In the following monograph, Keith Laybourn analyses the dynamic shifts in this history across 25 years. This scholarship will prove foundational for scholars and researchers of modern British history and socialist thought in the twentieth century.

Keith Laybourn is the Diamond Jubilee Professor at the University of Huddersfield within the Division of History, where he has previously been Professor of Modern British History. He is also President of the Society for the Study of Labour History.