The Indian Army, 1939–47
Experience and Development 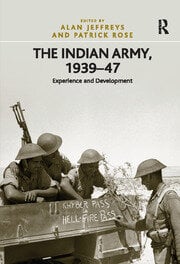 The Indian Army, 1939–47: Experience and Development

The sheer size and influence of the British Indian Army, and its major role in the Allied War effort between 1939 and 1945 on behalf of a country from which it was seeking independence, maintains its fascination as a subject for a wide variety of historians. This volume presents a range of papers examining the Indian Army experience from the outbreak of world war in 1939 to the partition of India in 1947. With contributions from many of those at the forefront of the study of the Indian Army and Commonwealth history, the book focuses upon a period of Indian Army history not well covered by modern scholarship. As such it makes a substantial contribution across a range of subject areas, presenting a compendium of chapters examining Indian Army participation in the Second World War from North Africa to Burma, plus a variety of other topics including the evolution of wartime training, frontier operations, Churchill and the Indian Army, the Army's role in the development of post-war British counterinsurgency practice, and of particular note, several chapters examining aspects of the partition in 1947. As such, the book offers a fascinating insight into one of the most important yet least understood military forces of the twentieth century. It will be of interest not only to those seeking a fuller understanding of past campaigns, but also to those wishing to better understand the development and ethos of the present day military forces of the Indian subcontinent.

Patrick Rose received a PhD in War Studies from King’s College London for a thesis examining command culture in the British and Indian Armies between 1919 and 1945. He is a West Point Fellow in military history, and co-editor and contributing author of the forthcoming book Allied Fighting Effectiveness in North Africa and Italy, 1942-1945. He is currently a senior analyst in the Defence Science and Technology Laboratory of the UK Ministry of Defence. A member of the Defence Policy Analysis Group, he has recently deployed to support NATO campaign planning in Afghanistan. Alan Jeffreys is Senior Curator, Social History at the Imperial War Museum. He is the author of The British Army in the Far East, 1941-45 (2005) and Training the Indian Army, 1939-45 (Ashgate, forthcoming). He is also co-editor of an academic history series entitled 'India at War'.

’... this collection of papers is invaluable in understanding how the Indian Army operated during the Second World War. It is easy to forget that its cream was initially deployed to North Africa and that the troops sent to Malaya and Singapore, and in the Arakan to an extent, were ill trained and hardly ready for combat... Yet, within a year of the Arakan disasters it was transformed into a first class fighting machine that repulsed the final major Japanese offensive in Burma and went on to drive them out of the country. It stood up well to the challenges of the immediate post-war years and maintained its good order and discipline through Partition and beyond. These papers show how all this was achieved and their authors are to be much congratulated.’ Mars & Clio: the journal of the British Commission for Military History 'The Indian Army, 1939-47 is an excellent book which is a must-read for historians of the Second World War and the British Empire. It also contains much food for thought for those concerned with doctrine, training and military culture. It deserves a wider readership than just its core audience.' RUSI Journal 'This book is a very readable outcome of an inspiring conference and lays the groundwork for further research. It should be read by anyone with a serious interest in the role of the Indian Army in the Second World War. Highly recommended. DURBAR, Journal of the Indian Military Historical Society 'Over a number of important and extremely interesting chapters, this book offers a snapshot on how the Indian Army worked within and then emerged from an Imperial system of security.' Second World War Military Operation Research Group