The Insider Threat
Assessment and Mitigation of Risks 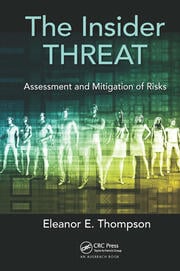 The Insider Threat: Assessment and Mitigation of Risks

This book provides emergent knowledge relating to physical, cyber, and human risk mitigation in a practical and readable approach for the corporate environment. It presents and discusses practical applications of risk management techniques along with useable practical policy change options. This practical organizational security management approach examines multiple aspects of security to protect against physical, cyber, and human risk. A practical more tactical focus includes managing vulnerabilities and applying countermeasures. The book guides readers to a greater depth of understanding and action-oriented options.

Eleanor E. Thompson, PhD, is known as an organizational change agent, and in 2016 was awarded the U.S. Coast Guard Commandant’s Superior Achievement Award for cybersecurity innovation. After conducting a groundbreaking sociological study on an information technology problem—Insider Threat—Dr. Thompson applied her research to transform the U.S. Coast Guard toward a vision for operating in the cyber domain. Dr. Thompson has a 20-plus year career history with the U.S. Coast Guard and has worked at the senior-most levels as a policy and operations advisor, including on the commandant’s staff (Tom Collins and Thad Allen), as well as advising those who would become commandant (Robert Papp).

During a historical post–9/11 effort by the government to both create and improve homeland security, Dr. Thompson served as a U.S. delegate to a specialized forum of the United Nations—the International Maritime Organization—located in London, UK, for the assembly, council (lead for Coast Guard), and technical cooperation committee (lead for Coast Guard). Notable achievements included furthering the adoption and implementation of the International Ship and Port Facility Security (ISPS) Code, which came into force in 2004, along with the U.S. implementation of ISPS as the Maritime Transportation Security Act of 2002/2004 (MTSA), first enacted by the 107th Congress to address port and waterway security and signed by President George W. Bush in November 2002. Her writings were incorporated into presidential documents including the US-EU Declaration on Combatting Terrorism (June 2004). Dr. Thompson served as a member of the transition team to stand up U.S. Department of Homeland Security and participated in subsequent quadrennial Homeland Security reviews, as well as development of the International Port Security Program.

Dr. Thompson has extensive experience with the development of national plans including the National Infrastructure Protection Plan (NIPP), the Transportation System Sector-Specific Plan (TS SSP), and various Presidential Policy Decision Directives relating to critical infrastructure and resilience (such as HSPD-7/PPD-21, PPD-8, and EO 13636). She has experience in national-level pandemic response (e.g., H1N1) and reducing risk from all hazards, natural and man-made—with a focus on physical, cyber, and human risk elements. Early in her career, she supported the Coast Guard Atlantic area and district commanders, and specifically as an advisor to the Atlantic area chief of operations, and Fifth District Operations chief as an operations analyst, where she managed Coast Guard Operation Sail 2000 participation/planning/security and helped to develop the initial concept of the deployable operations group among other operations. She is also a graduate of the U.S. Coast Guard Officer Candidate School, Yorktown, Virginia, and last class 3-98 that turned out the lights. She has served onboard an operational medium endurance cutter as the communications officer, intercepting go-fasts and conducting law enforcement operations on the Spanish Main.

Dr. Thompson holds an associate degree in applied criminal justice; a BS in sociology; a master’s degree in public administration (justice administration), all from Columbus State University, Georgia. She also holds a master’s degree in human resource management from Troy State University, Alabama, and a PhD in public policy and administration (information technology security and management) from Walden University, Minnesota. She has been an associate faculty member for over a decade for the University of Phoenix—Online and Northern Virginia Campus—where she is also a subject matter expert for curriculum development for both criminal justice and security in critical infrastructure protection and cyberspace, as well as for network security in information systems and technology.

Originally from Ottawa, Ontario, Canada, Dr. Thompson now calls Virginia home. She remains dedicated to the missions of the U.S. Coast Guard and continues to support the chief information officer and chief information security officer as a civil servant in Washington, DC.