The Institutional Dynamics of Culture, Volumes I and II
The New Durkheimians 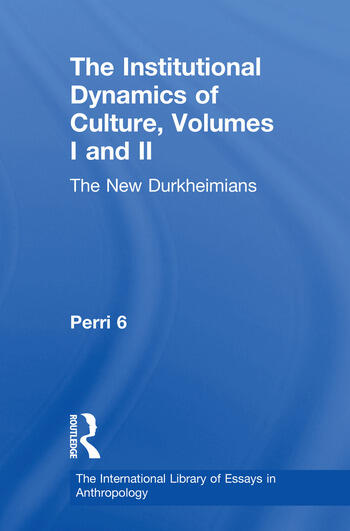 The Institutional Dynamics of Culture, Volumes I and II: The New Durkheimians

These two volumes present the most important recent developments in the institutional theory of culture and demonstrate their practical applications. Sometimes called 'grid-group analysis' or 'cultural theory', they derive from the work of Durkheim in the 1880s and 1900s and develop the insights of the anthropologist Mary Douglas and her followers from the 1960s on. First redefined within social and cultural anthropology, the theory's influence is shown in recent years to have permeated all the main disciplines of social science with substantial implications for politics, history, business, work and organizations, the environment, technology and risk, and crime and consumption. Today, the institutional theory of culture now rivals the rational choice, Weberian and postmodern outlooks in influence across the social sciences.

Contents: Volume 1: Introduction: Part I Theory: Four cultures: the evolution of a parsimonious model, Mary Douglas; Institutions: problems of theory, Mary Douglas; Traditional culture - let's hear no more about it, Mary Douglas; Why self-interest means less outside of a social context: cultural contributions to a theory of rational choices, Aaron Wildavsky; Cultural contributions to explaining institutional form, political change and rational decisions, Charles Lockhart; What is there to feel? A neo-Durkheimian theory of the emotions, Perri 6; Hi and low - in and out: approaches to social status, M.E.A. Schmutzer and W. Bandler; Cultural theory without grid and group, Michael Thompson; Institutional viability: a neo-Durkheimian theory, Perri 6. Part II Methods: Theories of risk perception: who fears what and why?, Aaron Wildavsky and Karl Dake; A quantitative test of the culture theory of risk perceptions: comparison with the psychometric paradigm, Claire Marris, Ian H. Langford and Timothy O’Riordan; Risk as politics, culture as power, James Tansey; Cultural theory and risk perception: a proposal for a better measurement, Susan Rippl. Part III Politics: Control over bureaucracy: cultural theory and institutional variety, Christopher Hood; Joined-up government in the Western world in comparative perspective: a preliminary literature review and exploration, Perri 6; Are you sitting comfortably ... then we'll begin: three gripping policy stories about pension reform, Steven Ney; Comparing political orientations: grid-group theory versus the left-right dimension in the 5 Nordic countries, Gunnar Grendstad; Life is a lottery: New Labour's strategy for the reform of developed governance, G. Stoker; The rules that keep us equal: complexity and costs of egalitarian organisation, Steve Rayner; New political violence in Africa: secular sectarianism in Sierra Leone, Paul Richards; Can policy making be evidence-based?, Perri 6; Cultural pluralism can both strengthen a