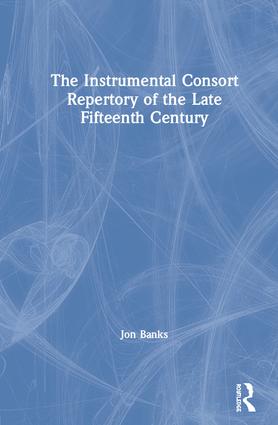 The Instrumental Consort Repertory of the Late Fifteenth Century

Though individual pieces from the late fifteenth century are widely accepted as being written for instruments rather than voices, they are traditionally considered as exceptions within the context of a mainstream of vocal polyphony. After a rigorous examination of the criteria by which music of this period may be judged to be instrumental, Dr Jon Banks isolates all such pieces and establishes them as an explicit genre alongside the more commonly recognized vocal forms of the period. The distribution of these pieces in the manuscript and early printed sources of the time demonstrate how central instrumental consorts were to musical experience in Italy at this time. Banks also explores the social background to Italian music-making, and particularly the changing status of instrumentalists with respect to other musicians. Convincing evidence is put forward in particular for the lute ensemble to be a likely performance context for many of the surviving sources. The book is not intended to be a prescriptive account for the role of instruments in late medieval music, but instead restores an impressive but largely overlooked consort repertory to its rightful place in the history of music.

’All who enjoy the repertoire will find this book stimulating…’ Early Music Review ’… Banks sets out his arguments in a clear and convincing manner. In doing so, he paints a fascinating portrait of musical life in the late 15th century, which makes the book of interest to more than just specialists in the field. There are copious printed musical examples, including several complete pieces, which give a very good idea of how the music might sound.’ The Consort ’Banks’s work is a welcome addition to the scholarship for the renewed and vigorous discussion it will surely provoke.’ Early Music ’Banks's survey of the repertory is exhaustive and meticulous, and his arguments careful; every time I questioned one of his arguments or thought of an alternative explanation, he had anticipated my objection and refuted it thoughtfully. Performers such as myself will find the book immensely useful as a guide to choosing performing forces and coherent concert programs for secular music of the late fifteenth and early sixteenth centuries. At the same time, musicological reseachers will find its careful counts and categories useful as a starting point for their own future work.’ Sixteenth Century Journal