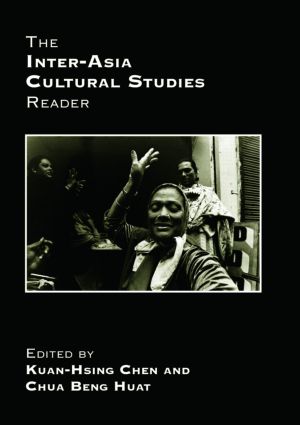 The Inter-Asia Cultural Studies Reader brings together the best of the ground breaking papers published in the journal and includes a new introduction by the editors, Chen Kuan-Hsing and Chua Beng Huat. Essays are grouped in thematic sections, including issues which are important across the region, such as State violence and social movements and work produced by IACS sub-groups, such as feminism, queer studies, cinema studies and popular culture studies.

The Reader provides useful alternative case studies and challenging perspectives, which will be invaluable for both students and scholars in media and cultural studies.

Chen Kuan-Hsing is a professor in the Department of Foreign Languages and Coordinator of the Center for Asia-Pacific/Cultural Studies at the National Tsing-Hua University in Taiwan. He is founding co-executive editor of Inter-Asia Cultural Studies. His previous publications, in English and Chinese, include Trajectories: Cultural Studies Inter-Asia (2000) and Stuart Hall: Critical Dialogues in Cultural Studies, edited with Dave Morley, (1996).

Chua Beng Huat is professor in the Asia Research Institute and the Department of Sociology, National University of Singapore. He is founding co-executive editor of Inter-Asia Cultural Studies. His previous publications include Life is Not Complete Without Shopping (2003) and Consumption in Asia: Lifestyles and Identities (2000).