The International Legal Governance of the Human Genome 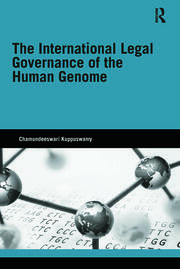 The International Legal Governance of the Human Genome

The human genome is a well known symbol of scientific and technological progress in the 21st century. However, concerns about the exacerbation of inequalities between the rich and the poor, the developing and the developed states, the healthy and the unhealthy are causing problems for the progress of scientific research. The international community is moving towards a human rights approach in addressing these concerns.

Such an approach will be piecemeal and ineffective so long as fundamental issues about economic, social and cultural rights, the so-called second generation of human rights, are not addressed. This book argues that, in order to be able to meaningfully apply a human rights framework to the governance of the human genome, the international human rights framework should be based on a unified theory of human rights where the distinction between positive and negative rights is set aside.

This book fills a gap in the literature on international legal governance of the human genome will provide an essential reference point for research into the right to development, development issues in bioethics, the role of international institutions in law making and research governance.