The International Political Economy of Transition 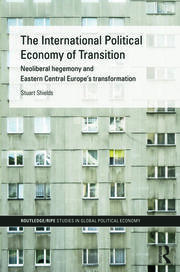 The International Political Economy of Transition

Shortlisted for the 2013 BISA IPEG Book Prize, this book explores how Eastern Europe’s post-communist transition can only be understood as part of a broader interrogation of neoliberal hegemony in the global political economy, and provides a detailed historical account of the emergence of neoliberalism in Eastern Central Europe.

Adopting an innovative Gramscian approach to post-communist transition, this book charts the rise to hegemony of neoliberal social forces. Using transition in Poland as a starting point, the author traces how particular social forces most intimately associated with transnational capital successful in the struggle over competing reform strategies. Transition is broken down into three stages; the "first wave" illustrates how the rise of particular social forces shaped by global change gave rise to a neoliberal strategy of capitalism from the 1970s. It goes on to show how the political economy of Europeanization, associated with EU enlargement instilled a "second wave" of neoliberalisation. Finally, exploring recent populist and left wing alternatives in the context of the current financial crisis, the book outlines how counter-hegemonic struggle might oppose a "third wave" neoliberalisation.

The International Political Economy of Transition will be of interest to students and scholars of international political economy, post-communist studies and European politics

This book is shortlisted for the 2013 BISA IPEG Book Prize

"This book is a must read for all those people interested to know why Poland is such a success story - a ‘rising star’ according to international financial media - in the current, crisis-ridden European Union. And why Poland, and other East Central European member states, may very well become next in line in the ongoing sovereign debt crisis." - Otto Holman, University of Amsterdam, The Netherlands.

"With his careful historical-structural research, Shields responds in the best of possible ways to stylized transitology and IPE canons. Changing the world may be hard, but neo-Gramscians can most certainly interpret it." - Magnus Ryner, King’s College London, UK.

"Stuart Shields' new book provides an exemplary model of how to formulate and use a critical IPE approach to understanding significant contemporary developments.  Although the subject of his book is the political economy of post-communist transition in central and eastern Europe, the context is the deep-seated transformations currently underway in the global political economy. His book is empirically rich and theoretically insightful. It takes the debate over the future of neoliberal forms of capitalism to a new level, and will be mandatory reading for all scholars interested in advancing a critical understanding of IPE." - Randall Gemain, Carleton University, Canada.

"Shields has provided a welcome and highly informative intervention in the debates on post-communist transition that has the potential to generate new avenues for critical political economy research by instigating an ambitious and much needed project of mapping out a multiplicity of case study contributions from the CEE region and beyond...this book is a contribution that transgresses disciplinary boundaries and will be of great appeal to those concerned with the themes of European political economy, international relations, area studies and sociology." - Jokubas Salyga, University of Nottingham, Europe-Asia Studies