The Israeli-Palestinian Conflict
A People's War 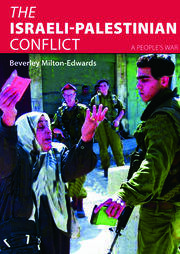 The Israeli-Palestinian Conflict: A People's War

The conflict between Israelis and Palestinians is one of the most enduring and complex in the modern world. But, why did the conflict break out? Who is demanding what, and why is peace so difficult to achieve?

The Israeli-Palestinian Conflict tackles the subject and analyses the conflict from its historical roots in the late nineteenth century to the present attempts at conflict resolution in the twenty-first century.

Framing the debate and analysis around issues such as Zionism, Palestinian nationalism, international peace efforts, the refugees, state-building, democracy and religious opposition and highlighted by first hand quotes and sources of the conflict from its major participants, Beverley Milton-Edwards explores the deep impact of the conflict on regional politics in the Middle East and why the enmity between Palestinians and Israelis has become a number one global issue drawing in the world’s most important global actors.

An essential insight into the complexities of one of the world’s most enduring conflicts between Israelis and Palestinians, this textbook is designed to make a complex subject accessible to all. Key features include a chronology of events and annotated further reading at the end of each chapter.

The Israeli-Palestinian Conflict is an ideal and authoritative introduction into aspects of politics in Israel, among the Palestinians – a vitally important issue for those studying the politics of the Middle East.

Introduction  1. Roots of conflict  2. Between the wars  3. Palestine after the Holocaust  4. Israel reborn  5. The Dispossessed  6. The Occupation Generation  7. The War of the Stones and Guns  8. A Global Concern  9. Moving from Zero

Beverley Milton-Edwards is Professor in the School of Politics, International Studies and Philosophy at Queens University Belfast. She is the author of Islamic Fundamentalism since 1945 (Routledge 2004) and Contemporary Politics in the Middle East (2006).

'This book tries to be objective by presenting the spectra of Israeli and Palestinian perceptions of their conflict and possible resolutions. It offers historical background from Ottoman times until the breakdown of the British Mandate and then presents the period from 1948 to 2008 by topic ... The design is excellent ...' -- CHOICE, C.M. Henry (University of Texas at Austin)