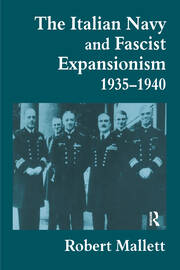 Robert Mallett argues that the Duce's aggressive war against the Mediterranean powers, Britain and France, was to secure access to the world's oceans. Mussolini actively pursued the Italo-German alliance to gain a Fascist empire stretching from the Mediterranean to the Indian Ocean.

" this is a well written and widely researched monograph" - Choice, May 1999

"Mallett has well researched naval planning in Italian naval archives. However, on the whole the work seems incomlete, its archival reach limited, its assertions at times inadequately documented, and contrary evidence slighted. Nonetheless, Mallett"s study enhances the debate that it does not resolve."

"his meticulous research among sources in two languages has produced an admirable work that makes a quantum leap in the English language understanding of Italy"s position. This book has a very definate place on the shelves of anyone whose interests cover the diplomatice or maritime history of the period