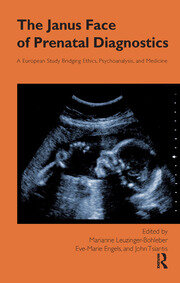 Coping with modern technology in the life sciences (biology and medicine) became a major issue for people living in the Twentieth Century, and continues to be so in the present century. Biotechnology creates new opportunities and possibilities, but also new dangers, risks, and ethical concerns. In this volume, ethical dilemmas in the context of a specific biomedical technology are discussed. Experts in ethics, philosophy, psychoanalysis, and medicine jointly investigated a field of prenatal and genetic research that seems particularly challenging: prenatal diagnostics. In many European countries amniocentesis, for example, is a routine diagnostic tool for women becoming pregnant after the age of thirty-five. In recent decades, enormous progress has been made in diagnosing genetically-based diseases and other serious prenatal abnormalities. Today, we know that a positive prenatal genetic diagnostic creates distress for all women and their partners, and necessitates making the difficult decision as to whether or not to allow the pregnancy to continue. As is demonstrated in this volume through the summaries of interviews with couples, the reactions of women and their partners who are facing this situation can be very different. The new and innovative interdisciplinary dialogue on this topic that is presented in this volume offers a deeper understanding of the ethical dilemmas raised by prenatal and genetic diagnostics, and explores ways to support couples in this extremely difficult situation.

Preface: Short Summary of the European Research Project EDIG -- Introduction -- Introduction and overview -- Ethics of care in prenatal diagnosis: implications of variations in law, policy, and practice in EDIG countries -- State of the art in prenatal diagnosis -- Findings of EDIG -- Empirical data evaluation on EDIG (Ethical Dilemmas due to Prenatal and Genetic Diagnostics) -- Some comments of countries that collected empirical and clinical data -- Comment A, concerning Italian empirical data -- Comment B, concerning empirical and clinical data from an Israeli perspective -- Comment C, concerning empirical data from a Greek perspective -- Interviewing women and couples after prenatal and genetic diagnostics -- Crisis intervention after prenatal diagnostics: an example -- “I’d also like to be in good hope myself for once.” The highly problematic decision-making process within the framework of PND and its dependency on a sufficiently developed, autonomous female identity -- Ethical Considerations about EDIG -- Experience and ethics: ethical and methodological reflections on the integration of the EDIG study in the ethical landscape -- Moral dilemmas and decision-making in prenatal genetic testing -- The moral status of the foetus -- Prenatal genetic counselling: conceptual and ethical issues -- The interchange between psychoanalysis and philosophy in the understanding of ethical decisions -- Clinical, Medical, and Societal Implications -- A model of integrated genetic counselling (IGC): EDIG as a transformation promoter in PND -- Prenatal and genetic diagnostics and trisomia 21: a current debate of ethical and psychosocial implications with reference to Greece -- PND in a Christian and Muslim culture. The EDIG project in Thrace, Greece -- Introducing new tests in genetic diagnostics: details of some ongoing controversial discussions in Swedish media