The Japan-US Trade Friction Dilemma
The Role of Perception 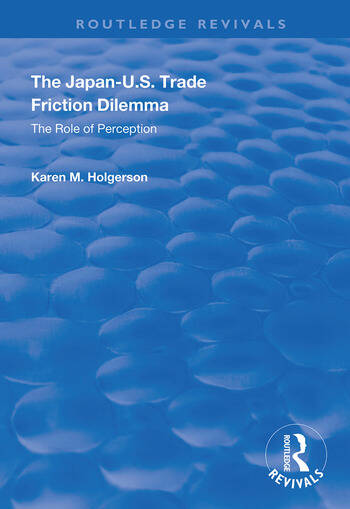 The Japan-US Trade Friction Dilemma: The Role of Perception

First published in 1998, this study of Japan-U.S. trade friction and the role perceptual differences have played in its evolution differs from its predecessors in key ways.

First, it is interdisciplinary, drawing on the research of anthropologists, area specialists, intercultural communication specialists, linguists, sociologists, and social psychologists as well as that of political scientists and economists.

Second, it both identifies and quantifies perceptual differences between Japanese and American opinion leaders regarding the large bilateral trade imbalances, the bilateral relationship, and national negotiating styles.

Third, original data were collected from completed questionnaires sent to 230 American and 230 Japanese opinion leaders from business, government, academia, and the media, who had been involved in some way with the rice, automotive, or semiconductor sectors.

Finally, based on the findings of this study, modest suggestions are offered on how the bilateral perceptual gap might be narrowed and trade friction diminished so that the structural and sectoral problems might more effectively be addressed.

This book should be of interest to scholars, government officials, and business leaders in Japan, the United States, and other countries in the global community who are interested in bilateral relations, international economic and political affairs, and trade friction. It should also be of special interest to social psychologists and cross-cultural scholars and researchers.