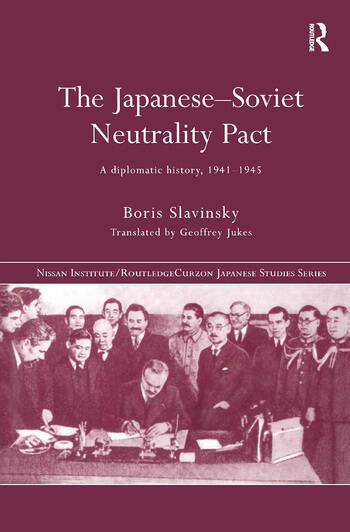 The neutrality pact between Japan and the Soviet Union, signed in April 1941, lapsed only nine months before its expiry date of April 1946 when the Soviet Union attacked Japan. Japan's neutrality had enabled Stalin to move Far Eastern forces to the German front where they contributed significantly to Soviet victories from Moscow to Berlin. Slavinsky suggests that Stalin's agreement with Churchill and Roosevelt to attack Japan after Germany's surrender allowed him to keep Japan in the war until he was ready to attack and thus avenge Russia's defeat in the war of 1904-1905. The Soviet Union's violation of the pact and the detention of Japanese prisoners for up to ten years after the end of the war created a sense of victimization in Japan to the extent that there is still no formal Peace Treaty between the two countries to this day.

Slavinsky draws on recently opened Russian archival material to demonstrate that the Soviet Union was passing information about the Allies to Japan during the Second World War. He also persuasively argues that vengeance and the (re)acquistion of land were the primary motives for the attack on Japan. The book contains empirical data previously unavailable in English and will fascinate anyone with an interest in the history of Japan, the Soviet Union and the events of the Second World War.

Boris Slavinsky spent many years researching Soviet foreign and defense policies in service of the British government which led him to later undertake academic research in the subject. He specialized in Russian/Soviet military history and policies towards the Asia Pacific region and was studying the Russian Far East shortly before he died.
Geoffrey Jukes is now retired but was formally an Associate Fellow of the Australian National University.

'Stavinsky's significant volume appears in English for the first time. His work will continue to be referenced as an important bibliography, and to inspire future generations of academics.' - Kimie Hara, Department of Political Science, University of Calgary