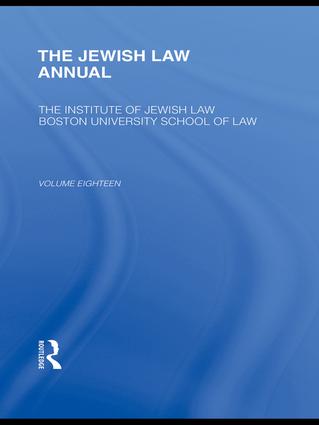 Volume 18 of The Jewish Law Annual contains six comprehensive articles on various aspects of Jewish law. Three articles address family law. One addresses the painful issue of the plight of the wife whose husband withholds conjugal relations. In a marriage where relations are withheld, the wife may seek a divorce, while her husband may withhold divorce. Prolonged withholding of divorce renders the wife an agunah, that is, a wife chained to a dead marriage and unable to start anew and rebuild her life. The author explores the halakhic feasibility of allowing a wife in such a predicament to bring a claim for damages against her husband for infliction of mental distress. If such claims are allowed, recalcitrant husbands may rethink their intransigence and consent to grant the divorce.

Another article examines the evolution of halakhic thinking on the parent–child relationship. It traces the stages by which halakhic family law changed from a basically patriarchal system in which both mother and the child were deemed subject to the father’s will, to a more balanced system where wife and husband have equal standing with respect to custody matters, and the best interest of the child is the main consideration in custody proceedings.

The volume also features a fascinating article on the history of two societies founded in London to further the study of Jewish law using modern scholarly methodologies. One society was active at the end of the 1920s and beginning of the 1930s, the second was active a decade later. The article explains the background to the establishment of the societies and analyzes the societies’ objectives, leaders and memberships. Both societies were founded with the intention of reformulating the classic halakhic sources in a manner that would render them suitable for contemporary application in the nascent Jewish state. But as the author shows, ultimately much of their energy was devoted to presenting the said sources to the non-Jewish legal world, for the purpose of reciprocal enrichment and edification.

Rounding out the volume are two jurisprudential studies on classic legal problems. The first explores the prohibition against seeking a second legal ruling when a ruling declaring something forbidden has been handed down. What is the scope of this rule, and in what ways does it differ from the res judicata principle in western law? The author shows that both procedural and substantive readings of the prohibition were put forward in the talmudic commentaries, and explains the jurisprudential implications of these different readings.

1. The Prohibition against Consulting Two Authorities and the Nature of Halakhic Truth, Shimshon Ettinger 2. The Changing Profile of the Parent-Child Relationship in Jewish law, Yehiel Kaplan 3. Jewish Law in London: between Two Societies, Amihai Radzyner 4. Corporal Punishment of Children in Jewish Law: a Comparative Study, Benjamin Shmueli 5. Recovery for Infliction of Emotional Distress: toward Relief for the Agunah, Ronnie Warburg 6. The Agent who Breaches his Principal’s Trust, Michael Wygoda

isProfessor of Comparative law at the Hebrew University of Jerusalem's Faculty of Law.

The Jewish Law Annual provides English-speaking readers with scholarly articles presenting jurisprudential, historical, textual, and comparative analysis of issues in Jewish law. Diverse in scope and focus, the articles reflect familiarity with both the rabbinical literature in its source languages, and contemporary epistemologies, methodologies, and worldviews.