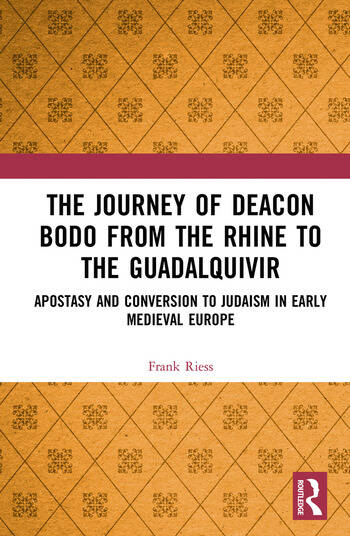 The Journey of Deacon Bodo from the Rhine to the Guadalquivir: Apostasy and Conversion to Judaism in Early Medieval Europe

The story of Bodo begins in the ninth century around the time of the death of Charlemagne in 814. It centres on a young Aleman aristocrat and his conversion to Judaism in 838, followed by his flight to the Muslim world of Al-Andalus. His apostasy constitutes an arresting footnote in the history of the Carolingian period, his change of faith viewed as a shocking episode attributed by some to an overly lax policy towards Judaism and its powerful merchants. Another factor could be ascribed to the study of Judaism and its links with Christianity, which was a feature of the time.

Bodo moved from a monastery on the Rhine, where he went as a small boy, to the imperial court, where he was now a gifted young scholar groomed for a top position. His unexpected abandonment of Christianity challenged his background and learning, and this was seen as a rebuke of the court network to which he belonged. Bodo left behind a growing conflict over succession between the emperor, Louis the Pious, and his sons that culminated in a civil war following the emperor’s death. As a result, the Frankish Empire was partitioned into three separate kingdoms in 843.

Meanwhile in Spain, two years after fleeing the Frankish world, Bodo debated the merits of Judaism and Christianity in Córdoba with Albarus Paulus, a beleaguered Christian in the Muslim world, not only airing criticisms of Christianity, but also some failings of the Carolingian imperial court. In 847 he is mentioned in the court annals as stirring up opposition in Islamic Spain against Christians, asserting that they should be forced to convert or be executed. This reported incident may be linked to a significant number of self-imposed deaths by Christians who, feeling increasingly persecuted, sought to provoke Islam by denouncing the Prophet and bringing about their execution.

The experience of Bodo’s apostasy was far from unique: other men and women who renounced Christianity for Judaism are also examined in conversion narratives recorded in the following two centuries. These episodes offer an illuminating study of religious changes taking place in Europe and the East where Christianity, Islam and Judaism competed in the ninth century and beyond. Bodo’s experience can be viewed as part of a wider phenomenon depicting men and women who travelled as pilgrims, refugees or converts seeking to find a home and escape persecution because of their beliefs.

List of maps and plates;  Acknowledgements;  Permissions;  List of abbreviations;  Chronology of events;  Overture;  1 God’s gift;  2 Father and sons;  3 The Messiah who never was;  4 What the emir saw;  5 Córdoba relics and the archbishop’s letter;  6 The Talmud and the Academy;  7 The answer of Maimonides and Judah Halevi;  8 Afterlives;  Coda;  Bibliography;  Index

Frank Riess is an Honorary Research Fellow at Birkbeck College, London. His monograph Narbonne and its Territory in Late Antiquity: From the Visigoths to the Arabs was published in 2013.

‘Scholars interested in the nature of conversion in the early Middle Ages will find this book stimulating’ - Ruth Mazo Karras, Reading Religion

'This erudite and engaging reconstruction of the life of Bodo/Eleazar situates its elusive protagonist at the intersection of Christian, Muslim, and Jewish worlds in flux, providing a sweeping account of the political and religious transformations of the ninth and tenth centuries and shedding new light on the meanings of inter-religious conversion' - Paola Tartakoff, Rutgers, The State University of New Jersey

'This is a nuanced and well-written study of Bodo/Eleazar, a ninth-century Christian convert to Judaism. As the first book dedicated to him and his journey from the Carolingian empire to the caliphate of Cordoba, it will be of great interest to scholars of medieval religious history, literature, and Jewish-Christian relations. Riess draws on a wide array of evidence, including archival documents, poetry, letters, and contemporary polemics to paint a fine-grained portrait of Bodo/Eleazar’s life and times. The richness of the historical account and attentive reading of relevant sources make this a valuable new study of an extraordinary yet overlooked figure' - Ryan Szpiech, University of Michigan