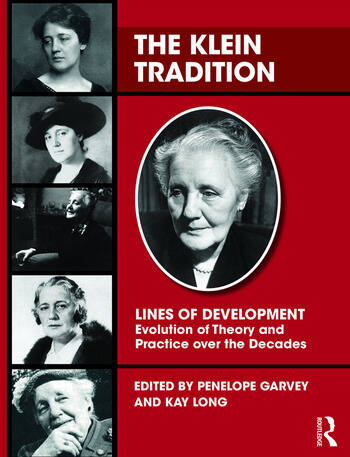 The Klein Tradition: Lines of Development—-Evolution of Theory and Practice over the Decades

Melanie Klein's extension of Freud's ideas - in particular her explorations into the world of the infant and her emphasis on the complex interactions between the infant's internal world of powerful primitive emotions of love and hate and the mothering that the infant receives - were greeted with skepticism but are now widely accepted as providing an invaluable way of understanding human cognitive and emotional development. Klein's insights shed light on persecuted states, guilt, the drive to create and to repair; they also provide the clinician with a theory of technique.

Klein's work has inspired the work of psychoanalysts around the world. Her concept of projective identification with its implications for the understanding of countertransference made a significant impact on her followers and on psychoanalysts in other countries and from other schools of thought. Further exploration of these ideas has led to greater understanding of how change occurs in psychoanalysis and has inspired a large literature with a particular focus on technique.

About the Editors and Contributors

Introduction to the Book

Melanie Klein: her main ideas and some theoretical and clinical developments

Some detail on Bion’s concept of container/contained

The Development of the Psychoanalytic Idea of Psychosis

. The Teaching of Klein: Some Guidelines for Opening Students to the Heart of Kleinian Thinking and Practice

I. Lurching between longing and destruction

The sense of self: generosity or narrow mindedness?

The mountains of primal grief

Autistic Features Encountered in the World of "As If"

Getting to know splitting as an organizing unconscious

phantasy then and today

. The projective process and the two positions today

Reparation: Waiting for a concept

Mourning and the Development of Internal Objects

Some thoughts on addiction and perversion in

"I used to think you were wonderful": the persecution/idealization cycle of melancholia

Illusion, Disillusion and Irony in Psychoanalysis

Primitive reparation and the repetition compulsion in the

analysis of a borderline patient

The perfect is the enemy of the good: On idealization and

Balancing on a Tightrope of Mania: a Precarious Normality

Psychoanalytic work with an adopted child with a history of

. "At times when I see your face thinking, I am thinking as well": A Plea for an Organising Object

is a training analyst of the British Psychoanalytical Society. Her first training was as a clinical psychologist and she has worked as a consultant psychotherapist in the NHS.

, PhD, is a psychoanalyst in private practice in New Haven, CT. She is an Associate Clinical Professor in the Psychiatry Department of the Yale School of Medicine and a Training and Supervising Analyst at the Western New England Institute for Psychoanalysis.

"The ideas Melanie Klein developed on the basis of Freud’s work have now been taken up in many ways and in most centres of psychoanalysis throughout the world. As Klein often said she felt she had moved the psychoanalytic focus to ‘deeper layers’ of the unconscious. In these Chapters, the extraordinary ramifications of her explorations can be seen in greart detail. In some ways it re-treads the territory of Elizabeth Spillius’ two-volume work on Melanie Klein Today, in the 1980s; but, this new work brings us up to date with the sharp end of Kleinian thinking 30 years later. Klein’s own writing being dense and repetitive has always been difficult to master, and indeed sometimes disturbing. But this collection of original papers by a huge range of psychoanalysts demonstrates how rewarding the effort to understand these ideas has been. These Chapters do not just demonstrate the versatility of the ideas, but also comprise debates about issues not yet finalised, and for the next generation to venture into. If there is a public view that psychoanalysis has run its course in intellectual life, then this book gives the lie to that. Its Chapters confirm that Freud started the radical discovery of the human mind, but his results have nevertheless benefitted from others adventurously pushing on with his project." --R. D. Hinshelwood, Professor Emeritus of Psychoanalytic Studies, University of Essex, and Fellow of the British Psychoanalytical Society