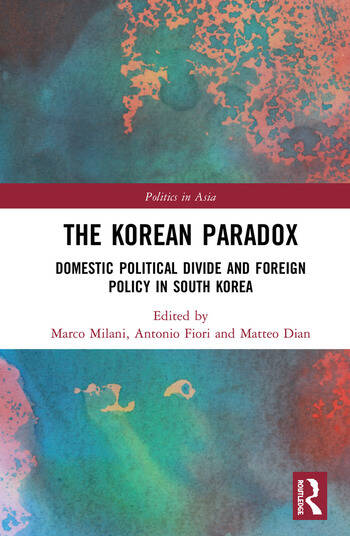 Bringing together an international line up of contributors, this book examines South Korea’s foreign policy strategies designed to cope with the challenges of the post-Cold War regional order and the emergence of a "Korean paradox".

Focusing on non-material factors in shaping the decision-making processes of primary actors, such as traditions, beliefs, and identities, this book begins by analysing the emergence of the "Asian Paradox" and explores how different political traditions have influenced South Korea’s foreign and security policies. In the second part (from Chapter 4), this book goes on to deal directly with the key issues in South Korea’s foreign policy today, with an emphasis on the progressive and conservative approaches to the challenges the country faces. This includes the North Korean threat, the alliance with the U.S., relations with China and Russia, the complicated relationship with Japan, and the emerging role of South Korea outside of Northeast Asia.

An innovative study of the domestic sources of South Korean foreign policy, The Korean Paradox investigates South Korea’s growing role at both regional and global levels. As such, it will be useful to students and scholars of Korean Studies, International Relations and East Asian Studies more generally.

Marco Milani is a Lecturer at the School of East Asian Studies, University of Sheffield, UK. His research interests include North and South Korea's foreign policy, contemporary Korean history, and inter-Korean relations.

is Associate Professor of History and Institutions of Asia at the University of Bologna, Italy and Adjunct Professor at Korea University’s International Summer Campus (Seoul). His research interests include inter-Korean relations and North Korea’s domestic and foreign policy.

Matteo Dian is a Research Fellow at the Department of Political and Social Sciences of University of Bologna, Italy. His recent publications include New Regional Initiatives in China's Foreign Policy (2018, with Silvia Menegazzi).