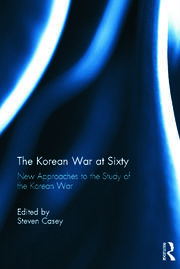 Korea used to be the ‘forgotten war.’ Now, however, experts widely view it as a pivotal moment in the history of the Cold War, while its legacy still scars contemporary East Asian politics.

The sixtieth anniversary of the Korean War is a fitting time both to assess the current state of historiography on the conflict and to showcase new research on its different dimensions. This book contains six essays by leading experts in the field. These essays explore all aspects of the war, from collective security and alliance relations, to home front politics and historical memory. They are also international in scope, focusing not just on the familiar Western belligerents but also on the actions of the two Koreas, China and the Soviet Union.

These stimulating essays shed new light on various aspects of the Korean War experience, as well as examining why the war remains so important to the politics of the region.

This book was originally published as a special issue of Journal of Strategic Studies.

Introduction. Steven Casey  1. "An Alliance Forged in Blood": The American Occupation of Korea, the Korean War, and the U.S.-South Korean Alliance William Stueck and Boram Yi  2. China and the Dispatch of the Soviet Air Force: The Formation of the Chinese-Soviet-Korean Alliance in the Early Stage of the Korean War Zhihua Shen  3. Branding an Aggressor: The Commonwealth, the United Nations and the Chinese Intervention in the Korean War Robert Barnes  4. Lost Chance or Lost Horizon? Strategic Opportunity and Escalation Risk in the Korean War, April-July 1951 Colin Jackson  5. Casualty Reporting and Domestic Support for War: The U.S. Experience during the Korean War Steven Casey  6. POWs: The Hidden Reason for Forgetting Korea Charles S. Young

Steven Casey is Reader in International History at the LSE. He is author of Cautious Crusade: Franklin D. Roosevelt, American Public Opinion, and the War against Nazi Germany (2001), and Selling the Korean War: Propaganda, Politics, and Public Opinion (2008), which won the Truman Book Award.