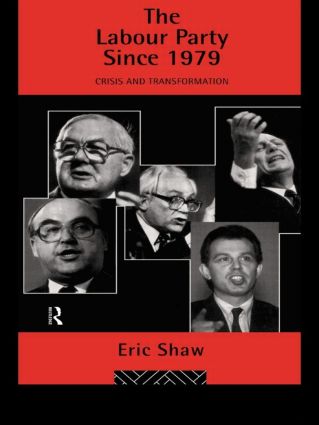 The Labour Party Since 1979

By Eric u University of Stirling Shaw

The Labour Party since 1979: Crisis and Transformation challenges the claim that Labour's only real hope for the future lies in shedding its ideological baggage. It rejects the notion taht the 'shadow budget' was the prime cause of its 1992 defeat and argues that the strategyof seeking an image of 'responsibility' and 'respectability' - which under the new leadership has become a paramount concern - does not offer the best route forward for the party.

The effect of this strategy - of abandoning traditional tenets, and adopting a policy profile more to the tastes of its critics in business and the media - will be to deprive Labour of its sheet-anchor; and even if successful electorally, the price will be that the hopes and aspirations of its supporters will be highly unlikely to be fulfilled.

`For those with ears to hear, Shaw has done the movement a real service. He outlines the challenges facing the party after its 1979 defeat and has persuaded 32 of the key figures in the subsequent transformation to talk about what happened.' - John Booth, Tribune

`Eric Shaw is a respected political scientist whose work on the Labour Party is based on meticulous research… he has produced another excellent book which could not have been published at a better moment, since he provides a comprehensive challenge to Labour's political strategy in the years immediately before the 1992 election… All those who desire a Labour government as soon as possible should read this important book.' - Patrick Seyd, New Statesman and Society

`…an exceptionally useful and informative book based on extensive interviews with key participants and access to some important internal party papers. It is the most complete and authoritative account so far produced of Labour's journey since 1983 back from the brink of dissolution into a regionalised party far removed from the competition for power.' - Mark Wickham-Jones, Times Higher Education Supplement

`Drawing upon internal Labour Party papers and interviews with Labour Party MPs and officials, the book is essential reading for those wishing to make sense of the Labour Party's trnasformation over the last decade.' - - Anthony Boulanger, Public Policy Review