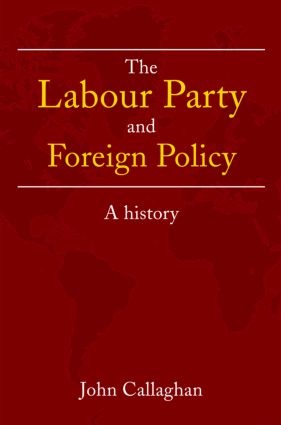 This book provides a penetrating new study of the Labour Party’s thinking on international relations, which probes the past, present and future of the party’s approach to the international stage.

The foreign policy of the Labour Party is not only neglected in most histories of the party, it is also often considered in isolation from the party’s origins, evolution and major domestic preoccupations. Yet nothing has been more divisive and more controversial in Labour’s history than the party’s foreign and defence policies and their relationship to its domestic programme.

Much more has turned on this than the generation of tempestuous conference debates. Labour’s credentials as a credible prospect for Governmental office were thought to depend on a responsible approach to foreign and defence policy. Its exclusion from office was often said to stem from a failure to meet this test, as in the 1950s. The composition of Labour Cabinets was powerfully influenced by foreign and defence considerations, as was the centralization of power and decision-making within Labour Governments. The domestic achievements and failures of these periods in office were inextricably connected to international questions.

The Labour Party and Foreign Policy is recommended for undergraduate and postgraduate courses in British politics and European history.

If history is not to be repeated, it must first be understood. Which is why the publication of this elegant and comprehensive study is so valuable and timely. Most historians of the Labour Party ignore or marginalize its foreign policy. But not John Callaghan. He puts foreign policy at the centre of the entire Old Labour story, in the process illuminating many of the dark corners of the Party's past. Anyone needing a reliable guide to the full complexity of that past would do well to start with this excellent book.

John Callaghan has written an authoritative, lucid and compelling analysis of Labour's foreign policy from the beginning of the twentieth century to the 1980s. Its relationship to the legacy of liberalism, to socialist internationalism, to colonialism and imperialism and to war - especially the two world wars - figure prominently in this excellent volume.