The Language and Literature Reader 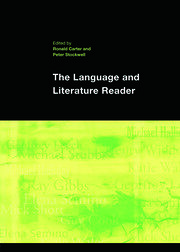 The Language and Literature Reader

The Language and Literature Reader is an invaluable resource for students of English literature, language, and linguistics. Bringing together the most significant work in the field with integrated editorial material, this Reader is a structured and accessible tool for the student and scholar.

Divided into three sections, Foundations, Developments and New Directions, the Reader provides an overview of the discipline from the early stages in the 1960s and 70s, through the new theories and practices of the 1980s and 90s, to the most recent and contemporary work in the field. Each article contains a brief introduction by the editors situating it in the context of developing work in the discipline and glossing it in terms of the section and of the book as a whole. The final section concludes with a ‘history and manifesto’, written by the editors, which places developments in the area of stylistics within a brief history of the field and offers a polemical perspective on the future of a growing and influential discipline.

Ronald Carter is Professor of Modern English Language at the University of Nottingham. He has written and edited more than 50 books in the fields of literary-linguistics, language and education, applied linguistics and the teaching of English. He has taught and lectured in over thirty countries world-wide and published over 100 academic papers. Recent and forthcoming books include: Exploring Grammar in Context (with Rebecca Hughes and Michael McCarthy) (CUP, 2000); The Cambridge Guide to Teaching English to Speakers of Other Languages (ed with David Nunan) (CUP, 2001); second editions of Working with Texts and (with John McRae) The Routledge History of Literature in English (Routledge, 2001) and The Routledge Guide to Modern Writing (2003). Language and Creativity: The Art of Common Talk (Routledge) was published in 2004 and forthcoming in 2005 is The Cambridge Grammar of English (with Michael McCarthy). Professor Carter is a fellow of the Royal Society of Arts, a fellow of the British Academy for Social Sciences and is currently chair of the British Association for Applied Linguistics (2003-2006).

Peter Stockwell is Professor of Literary Linguistics at the University of Nottingham and the author of many books and academic articles in the fields of literature and language, sociolinguistics, critical discourse analysis, language and cognition, surrealism and literary theory. His most recent books include Sociolinguistics (Routledge, 2001), Cognitive Poetics (Routledge, 2002) and Language in Theory (with Mark Robson, Routledge, 2004). He is the editor of the Routledge English Language Introductions series. Previous books include The Poetics of Science Fiction (Longman, 2000), a co-edited festschrift volume in honour of Professor Peter Verdonk of the Universiteit van Amsterdam, entitled Contextualised Stylistics (Rodopi). In 1996, with Howard Jackson, he wrote a language study textbook, An Introduction to the Nature and Functions of Language (Stanley Thornes), and edited (with Derek Littlewood) a collection of essays on science fiction and fantasy literature: Impossibility Fiction: Alternativity - Extrapolation - Speculation (Rodopi). In 1991 he edited with Phillip Shaw, Subjectivity and Literature from the Romantics to the Present Day: Creating the Self (Pinter). He also edits the e-journal Nottingham Linguistic Circular. In the School of English Studies, he is director of Praxis - the centre for the study of literary discourse. He is also head of Modern English Language, acts as Deputy Head of School, and is the Vice-Dean of the Faculty of Arts. Peter Stockwell is currently treasurer of the Poetics and Linguistics Association (PALA). >