The Language of Pop Culture 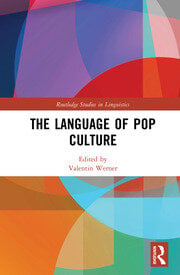 The Language of Pop Culture

This collection brings together contributions from both leading and emerging scholars in one comprehensive volume to showcase the richness of linguistic approaches to the study of pop culture and their potential to inform linguistic theory building and analytical frameworks. The book features examples from a dynamic range of pop culture registers, including lyrics, the language of fictional TV series, comics, and musical subcultures, as a means of both providing a rigorous and robust description of these forms through the lens of linguistic study but also in outlining methodological issues involved in applying linguistic approaches. The volume also explores the didactic potential of pop culture, looking at the implementation of pop culture traditions in language learning settings. This collection offers unique insights into the interface of linguistic study and the broader paradigm of pop culture scholarship, making this an ideal resource for graduate students and researchers in applied linguistics, English language, media studies, cultural studies, and discourse analysis.

Valentin Werner is assistant professor of English and Historical Linguistics at the University of Bamberg. His recent publications include two books on the present perfect (2014, 2016), a co-edited special issue of the International Journal of Learner Corpus Research (2018), and contributions to journals such as English Language and Linguistics, English World-Wide, and Corpora.