The Last Days in Israel
Understanding the New Israeli Democracy 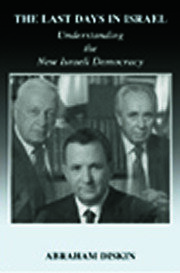 The Last Days in Israel: Understanding the New Israeli Democracy

During the 1990s many dramatic changes influenced the basic characteristics of the Israeli democracy. This volume examines the challenges and circumstances the country has faced and addresses both the public's and leadership's singular goal of "peace and security".

The book also investigates the renewed constitutional framework which attempted to meet new challenges, but in reality contributed to the evolution of "new politics" and a new party system. This new system is explored through an analytical study of the history of the party system with an emphasis on new phenomena, such as the growing fragmentation of recent years. Developments since the early 1990s are also examined, looking at the governmental periods of Prime Ministers: Shamir, Rabin, Peres, Netanyahu and Barak.

Part 1: Basic Problems and Basic Objectives: The Basic Social Dilemma and Israeli Democracy  1. The Jewish State: Demography and the Legal Norm  2. The Security Equation: Motivation and Means  3. Social and Political Polarization: Democracy, Jewishness, Security and Peace  Part 2: The Constitutional Revolution and the Breakdown of Balances between the Branches of Government: The Judiciary - "Make us a king to judge us"  4. The Legislative and the Executive: The Courage to Repent before the Fall  Part 3: The Party Map: Roots and Development, 1949-92  5. The New Party Map, 1996-99  6. The Power of the Political Centre  Part 4: Days of Storm and Stress: From Rabin to Peres - "Yes to peace - no to violence"  7. From Peres to Netanyahu: The Shifting Sands of Parity  8. The Netanyahu Government: In the Absence of Checks and Balances  9. The 1999 Elections  10. The Barak Government: From Dilemma to Dilemma  11. The Sharon Government  Part 5: Conclusion: Solutions in the Absence of a Solution