The Law and Society Canon 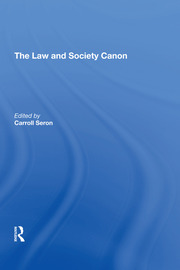 The Law and Society Canon

This volume presents seminal monographs that continue to shape the contemporary discipline of law and society. Long before the turn toward cultural analysis of social institutions, socio-legal scholars demonstrated the ways in which law and its activities is contingent on the context of time, place, and hierarchy. The works selected for this volume demonstrate this foundational principle of the discipline of law and society.