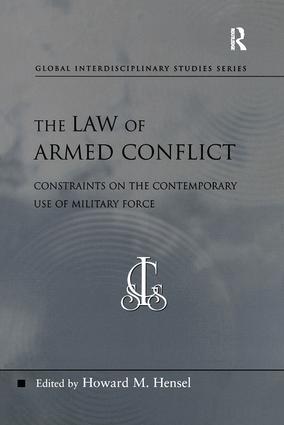 The Law of Armed Conflict

Constraints on the Contemporary Use of Military Force, 1st Edition

'The right treatment, on the right topic, at the right time, The Law of Armed Conflict is thoughtful and thought-provoking, with broad coverage and deep analyses. Must reading for scholars and policymakers.' Charles W. Kegley, University of South Carolina, USA and President, International Studies Association (1993-1994) 'This volume is indispensable for all those interested in gaining greater insight into the changing role of the law of war, human rights and ethics in armed conflict. Special attention is placed on the "war on terrorism" but always within a historical context while simultaneously emphasizing the contemporary dilemmas. Significant issues are raised…' Professor Adamantia Pollis, New School University, USA '…a welcome addition to the body of literature on the Law of Armed Conflict, also known as International Humanitarian Law…The articles are preceded by an insightful introduction…' JustWarTheory.com 'All of the articles in the volume are thoroughly researched, and highly readable…this volume skillfully brings together a group of extraordinarily talented commentators…The articles, taken together, will contribute substantially to readers' understanding of this important set of issues.' The Law and Politics Book Review '…editor Howard Hensel has assembled a valuable collection of papers…the standard of writing is consistently high throughout the book. With meticulous attention to detail, each chapter is well-sourced and the authors' arguments based on clear reasoning…the book is an excellent contribution to the literature and one likely to inspire more analysis of this important dimension of international politics.' Australian Journal of Politics and History

The Global Interdisciplinary Studies Series reflects a recognition that globalization is leading to fundamental changes in the world order, creating new imperatives and requiring new ways of understanding the international system. It is increasingly clear that the next century will be characterized by issues that transcend national and cultural boundaries, shaped by competitive forces and features of economic globalization yet to be fully evaluated and understood. Comparative and comprehensive in concept, this series explores the relationship between transnational and regional issues through the lens of widely applicable interdisciplinary methodologies and analytic models. The series consists of innovative monographs and collections of essays representing the best of contemporary research, designed to transcend disciplinary boundaries in seeking to better understand a globalizing world.