The Law of Treaties 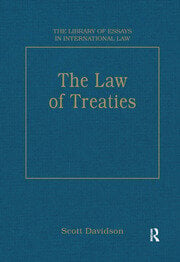 The Law of Treaties

The centrality of treaties to the international legal system requires little emphasis. Not only is the treaty a source of law that the International Court of Justice (ICJ) is bound to apply when resolving international disputes, but it is also the medium through which the vast preponderance of international legal intercourse is now conducted. The essays contained in this informative volume disclose a wide variety of opinion on a broad range of issues concerning the conclusion, application and termination of treaties.

Contents: Evolution: The treaty on treaties, Richard D. Kearney and Robert E. Dalton. The Nature of Treaties: What is an agreement in international law? Kelvin Widdows; A mirage in the sand: distinguishing binding and non-binding relations between states, Christine Chinkin; The significance of the registration or non-registration of an international agreement in determining whether or not it is a treaty, D.N. Hutchinson; Some problems regarding the object and purpose of treaties, Jan Klabbers; The international legal obligations of signatories to an unratifies treaty, Martin A. Rogoff. Treaty Integrity: Universality or integrity? Some reflections on reservations to multilateral treaties, Catherine Redgwell. Treaty Interpretation: The International Law Commission's draft articles upon interpretation: textuality redivivus, Myres S. McDougal; Vae victis, or woe to the negotiators! Your treaty or our 'interpretation' of it?, Sir Gerald Fitzmaurice; Varieties of approach to treaty interpretation: with special reference to the Draft Convention on the law of treaties before the Vienna diplomatic conference, Francis G. Jacobs; Theory and practice of treaty interpretation, Maarten Bos. Invalidity, Suspension and Termination of Treaties: Problems concerning the validity of treaties, T.O. Elias; Down the Danube: the Vienna Convention on the law of treaties and the case concerning the Gabcikovo-Nagymaros project, Daniel Reichart- Facilides; The concept of jus cogens in the Vienna Convention on the law of treaties, Merlin M. Magallona; Unilateral denunciation of treaties : the Vienna Convention and the International Court of Justice, Herbert W Briggs; Nonperformance of international agreements, Christine Chinkin.