The Law of Tug and Tow and Offshore Contracts 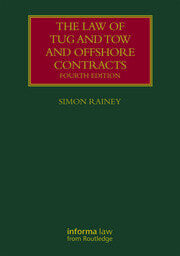 The Law of Tug and Tow and Offshore Contracts

Fully updated and revised to take into account the new BIMCO Supplytime 2017 contract with a detailed analysis of the changes since the Supplytime 2005 form and including a new analysis, for the first time, of the BIMCO Bargehire form, this is the only modern work on the law of towage and offshore vessel services. It gives a comprehensive and extensively researched account of the general law coupled with a detailed clause-by-clause commentary and analysis of all of the major standard contracts used in the international offshore, towage and heavylift sectors, comprising the BIMCO Towcon, Towhire, Supplytime and Heavylift forms, the full suite of BIMCO Wreck Removal forms and, now, also the BIMCO Bargehire form, as well as the ISU Salvcon and Salvhire forms.

The Law of Tug and Tow and Offshore Contracts has rapidly established itself as a leading text and is written by, Simon Rainey QC, one of the foremost shipping practitioners with unrivalled experience in the field.

Key reasons to buy The Law of Tug and Tow and Offshore Contracts, Fourth Edition

• the only in-depth analysis of the drafting history of the BIMCO standard form offshore contracts, comparing the recent amended versions in their drafting context;

• written with an eye on the practicalities of how the contracts work given the everyday problems which arise in the industry, with guidance where the standard forms may require amendment

Simon Rainey QC has been cited for over 25 years as a Leading Silk in the areas of Shipping, Commodities, Commercial Litigation and Dispute Resolution, International Arbitration, Energy and Natural Resources, and Insurance and Reinsurance and Professional Negligence by Legal 500 and Chambers and Partners.

'…a must have for the shelves of any maritime law practitioner or adviser.

BIMCO is quite right to conclude that the book has ‘become effectively a "bible" for all those in the industry using these forms’.

…this an excellent book, well up to date and with detailed, comprehensive and authoritative commentary.'