The Law of the Lifegivers
The Domestication of Desire 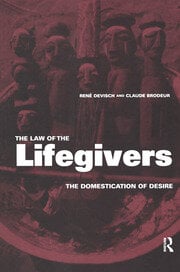 The Law of the Lifegivers: The Domestication of Desire

African societies are gifted with a rich creativity, often expressed in intimate corporeal terms. For the Yaka people of southwestern Congo, such manifestations can have individual, social, or even cosmic significance.
The Law of the Lifegivers investigates the importance among the Yaka of body and space in their daily life, exercise of power, and initiatic traditions. Through this analysis, Devisch and Brodeur show that body, desire, and symbol are intertwined, so that bodily expression can act as sensuous and powerful symbol. The domestication of passion and the institutionalizing of a subject are all expressed in bodily terms, particularly during initiations; the ethical order of law rests on many bodily symbols, including the importance of maternal and paternal lifegivers. The authors vividly describe the different life-giving or life-threatening roles which function in this society, such as sorcerer, diviner, therapist, and chief, as well as the funeral drama which shapes the passage to the afterlife with the ancestors, as experienced by the dying subject and his community.
Through their dialogue and correspondence, Devisch and Brodeur (an anthropologist and a psychoanalyst, respectively) bring together two, sometimes conflicting, intellectual approaches. They aim to unravel a truth which is freed, as much as possible, from the presumption that only the West possesses the knowledge of objective discourse and science. Through the interaction, the authors reveal the semantic threads, located at the very heart of the most vital, life-giving processes, which weave the fabric of the practice and thought of a riveting, passionate Africa.

1. ITINERARY AND METHODS 2. From Anthropology to Psychoanalysis 3. From Psychoanalysis to Anthropology 4. THE YAKA: PRINCIPAL FIGURES 5. The Yaka Divination: The Birth of Uterine Discourse 6. The Therapist: Healing the Affects By Remodeling the Body 7. Death and the Dialectic of Limits 8. INTERSECTIONS 9. The Paramount Chief: The Introduction of the Order of Ethical Law 10. Sorcery and Fetish 11. Four Figures of the  Yaka Unconscious