The Law of the United States
An Introduction 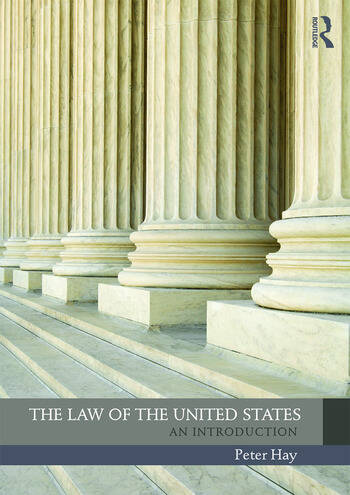 The Law of the United States: An Introduction

The Law of the United States offers an introduction and overview of the American legal system. With an emphasis throughout on up-to-date case law and current literature, it is an ideal first point of entry for students and practitioners alike, and a starting point for further independent research.

Professor Hay provides a concise and straightforward explanation of the law and legal vocabulary, as well as an introduction to the different types of law and legal techniques. He explains the role of Congress, the Executive and the Courts, and clarifies the mechanisms behind the branches of public and private law in the United States. He introduces the reader to the complexities of federal and state law, emphasizing that the many areas of public law and virtually all areas of private law are the separate law of the 50 States, the District of Columbia, and the (U.S.-dependent) Territories in which common language, legal tradition, and culture have served to bring about a basic legal unity. Several private law areas (contract law, torts, family law, succession) receive detailed treatment, as do criminal law and procedure.

The book provides detailed references to legislation, case law, and the literature, up-to-date through early 2016. Four appendices present a detailed case study with commentary to aid the civil law reader in understanding of the case law system; the text of the U.S. Constitution (referred to in several contexts throughout the book); a geographic map of the U.S. federal court system; and information on the Legal Profession in the United States.

Peter Hay is the L.Q.C. Lamar Professor of Law Emeritus at Emory University, USA. His research focuses on the fields of conflict of laws, European Union law, comparative law, and contracts and sales. From 1963–1991 he held a chair at the University of Illinois and served as Dean of its law faculty for ten years. From 1994–2000 he held, concurrently with his Emory appointment, the chair for Civil Law, Foreign and International Private Law, and Comparative Law at the University of Dresden, Germany, where he served as Dean of its law faculty from 1997–2000. He has been a visiting professor at Stanford University, Central European University in Budapest, Bucerius Law School, and the universities of Bonn, Freiburg, and Konstanz in Germany.

Peter Hay's book is a standard work on U.S. law. I have used previous editions many times to refresh my memory on certain aspects or for getting a first introduction into areas I did not know. The book is informative, makes references to further literature and helps to understand the context which is not always clear to a foreign lawyer.

Professor Peter Hay’s deep engagement with Comparative Law and Private International Law provides him with an unmatched set of qualifications to prepare an Introduction to the Law of the United States for a readership of English and Commonwealth students and legal professionals.

The cliché that the United Kingdom (and for that matter the English-language Commonwealth family) and the United States are divided by a common language has genuine salience when it comes to the language of law. Today, of course, Brexit notwithstanding, the engagement with the law and legal system of the European Union has reshaped these UK/Commonwealth legal systems in new ways, which distance its students and practitioners from the U.S. branch of their common ancestry. That alone makes the arrival of this book important. But the divergence of the U.S. from its common ancestry is older and deeper than that.

The existence alone of 50 intra-U.S. jurisdictions with continuing dominance, but also still-continuing substantive differences within the classic fields of Contracts, Torts, Property, Criminal Law, Procedure and Evidence, creates a fluidity that to an outsider can seem chaotic. Added to that, the complex overlay and even more complex preemptive effects of federal law within a vague Constitutional system and the distinctions from other English-language jurisdictions become even more mystifying.

This situation requires a lucid and magisterially authoritative guide. Peter Hay’s book is that guide. Any attorney, any academic and any student preparing for an engagement with U.S.-related situations will find it essential.

The career of Professor Hay has enabled him to undertake a scrutiny of U.S. law from a unique position. He is both an inside expert, and a highly qualified outside observer. His scholarship has strong roots both in the United States and in Europe – which allows perspective, and at the same time, a full understanding of intricate details.