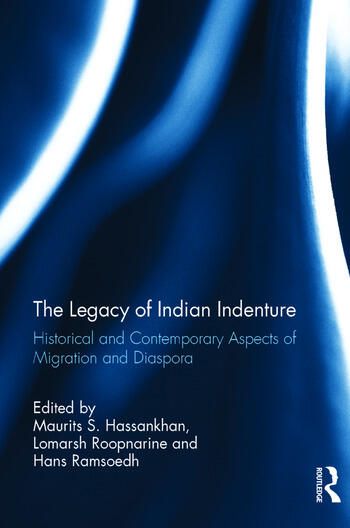 The Legacy of Indian Indenture: Historical and Contemporary Aspects of Migration and Diaspora

This book is the second publication originating from the conference Legacy of Slavery and Indentured Labour: Past, present and future, which was organised in June 2013, by the Institute of Graduate Studies and Research (IGSR), Anton de Kom University of Suriname.

The articles are grouped in four sections.

Section one concentrates on indenture in the Caribbean and the IndianOcean and includes four diverse, but inter-related chapters and contributions. These reveal some newly- emerging, impressive trends in the study of indenture, essentially departing from the over used neo-slave scholarship. Not only are new concepts explored and analysed, but this section also raises unavoidable questions on previously published studies on indenture.

Section two shows that there are many areas that need to be re-examined and explored in the study of indenture. The chapters in this section re-examine personal narratives of indentured labourers, the continuous connection between the Caribbean and India as well as education and Christianization of Indians in Trinidad. The result is impressive. The analysis of personal accounts or voices of indentured servants themselves certainly provides an alternative perception to archival information written mostly by the organizers of indenture.

Section four addresses health, medicine and spirituality – themes which, until recently, have received little attention. The first article examines the historical impact of colonialism through indentureship, on the health, health alternatives and health preferences of Indo-Trinidadians, from the period between 1845 to the present. The second examines the use of protective talismans by Indian indentured labourers and their descendants. Little or no psychological research has been done on the spiritual world of Indian immigrants, enslaved Africans and their respective descendants, with special reference to the use of talismans.

Maurits S. Hassankhan is Head of the History Department of the Faculty of Humanities at Anton de Kom University of Suriname.

Lomarsh Roopnarine is Associate Professor of Caribbean and Latin American Studies at Jackson State University, United States. Hans Ramsoedh studied history in The Netherlands. His Ph.D thesis (1990) deals with Dutch colonial politics and policy in Suriname in the thirties and forties of the twentieth century. He regularly writes about the contemporary history of Suriname. Since 1992 he is the managing-editor of OSO, a scientific journal on Suriname and the Caribbean, published in The Netherlands.